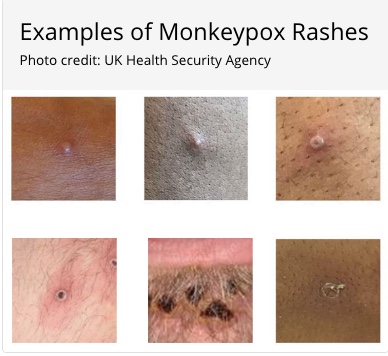 The last few years have been reminiscent of something straight out of a Hollywood film. The movies “Contagion” and “Outbreak” immediately come to mind. The world has been hit back to back with COVID, COVID variations, and now monkeypox.

The Center for Disease Control (CDC) is reporting a total of 5,811 confirmed cases of monkeypox as of Tuesday, August 2. Alabama has had only 15 confirmed cases, but numbers are rising.

So, what exactly is monkeypox? The CDC lists it as a rare disease caused by infection with the monkeypox virus.  It is categorized in the same family as smallpox and has similar symptoms, only milder, to smallpox.

The rash may be located near the genitals or anus, but may appear on hands, feet, chest, face or mouth. There are several stages the rash will go through, including scabs, before it heals. It may look like pimples or blisters. The rash may be painful or itchy.

Symptoms will usually appear within three weeks of exposure and a rash will usually develop one to four days after flu-like symptoms begin.

The virus is contagious once symptoms begin and will remain so until the rash is completely healed and all scabs have fallen off according to the CDC.

If you believe you may have monkeypox or are showing symptoms, avoid close contact with others until you have been checked out by a healthcare provider.