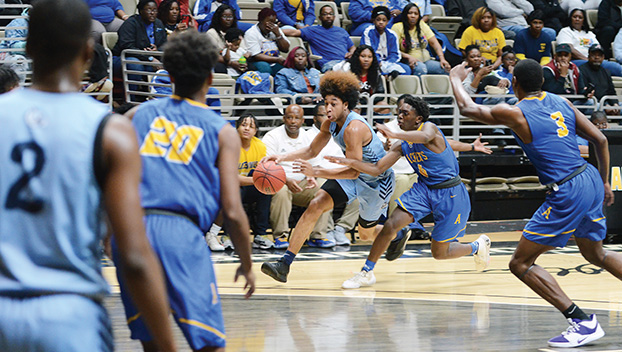 Calhoun star point guard JD Davison drives to the hoop against Aliceville in the Southwest Regional title game at ASU last week. He led with 43 points. | Photo by Adam Prestridge

Calhoun School’s varsity boys basketball team concludes its dream season this Friday, surpassing its Class 2A semifinals appearance from last season, as the Tigers play for the state title in Birmingham.

As the postseason continues, tributes to John “Big John” Williams, former sheriff of Lowndes County, who was killed by a gunman in November 2019, were made by the coach and players. Head coach Ervin Starr spoke on the loss the county
suffered following Monday night’s semifinals victory over Red Bay.

“When we found out that ‘Big John’ passed away, we made sure we dedicated the rest of the season to him,” he said. “The fact that the Central girls made it here and we made it here, that made it even more special.”

Starr, as well as Demareus Cheatham and JD Davison, all dedicated the impending championship game to the late sheriff.

If the Tigers knock off Barbour County in the title game, it will be the first state title in nearly 20 years after claiming the crown in 2003. It was an accolade Davison, the team’s star junior point guard, recognized.

“The confidence I had was falling short of winning it all last season” he said “We wanted to get back here; we put in the work during the offseason, so we would have a chance to be here today. This is a moment we have been fighting for. We came prepared.”

Monday night, the Tigers found themselves in a Final Four battle in the semifinals of the Alabama High School Athletic Association’s State Tournament. Calhoun’s match up was against Red Bay, a team coming off a letdown in the Sweet 16 last season. It was the first appearance in Birmingham for Red Bay in team history.

In the first quarter, the Tigers got off to an early start, shooting 36 percent from the field, while keeping Red Bay to a mere 8 percent. At the end of the quarter, the Lowndes County squad was leading 10-3.

In the second quarter, shooting improved for Calhoun as they continued to roll through Red Bay, shooting 42 percent from the floor and holding Red Bay to 15 percent shooting, including 1-of-7 from three-point range. At the half, Calhoun had a commanding 24-9 lead.

After the game, Starr spoke about the pace of the game.

“We knew they would try to slow the game down,” he said. “We kept looking at more film, thinking they had a great defense. We thought we were going to have a tough time with it, but they weren’t ready for our pace of basketball. It’s a lot of running you have got to do. That’s what we were banking on, them not being able to keep up with us.”

In the fourth quarter, the same game flow continued. Red Bay fought back slightly and ended the quarter winning by two points, although it did not aid the final score as the Tigers went on to win 46-30.

Davison kept eyes locked on his game play the entire night leading the Tigers with a double-double with 18 points and 11 rebounds. Behind him was Spencer Johnson with 10 points, while Cheatham and Mason both had eight points.

No player from Red Bay was able to score double digits , proof of the team’s constant offensive struggles.

Last season, the Tigers were put out in the Final Four and Starr remembers.

“I was proud of all our guys,” he said “We have been told since last year that we wouldn’t make it back to this point. We all knew we were coming back because of the way we prepared all summer.”

The State Championship is scheduled for tip off at 10:45 a.m. Friday at the Birmingham-Jefferson Civic Center’s Legacy Arena. Barbour County upset Lafayette, the only undefeated team in the state, Monday afternoon.

Updates from the game will be posted to The Signal’s Facebook page.