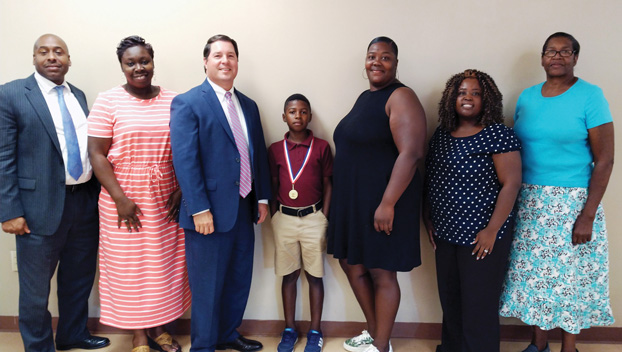 Several students were honored and the community got together last week for the Character In Action banquet to open the school year.

“This was our fourth annual Character In Action banquet,” Lowndes County Juvenile Court Judge Adrian Johnson said. “We started it about a year or two after we had begun the Character In Action Program as a way to kick off the school year and highlight the program. We bring back all of the past recipients from past school years and their families and we have a dinner for them, we have a presentation where each of the children gets a medal and then we have a recognition where the recipient for that month for the new school year.”

“Corduris has truly changed his behavior and his academics have improved,” McMeans-Hester said in her nomination form. “His classmates as well as other teachers have noticed his growth. He loves to show his classmates how something is done. I am very proud of him. He continues to push himself to do better.”

Johnson said Coleman had lots of support at the banquet.

“We had his family, his teacher and his principal there,” he said. Plus the superintendent was there. It’s just a great evening to kick off the Character In Action program. It’s used to energize our educators and students family members for the coming school year.”

Johnson said awards are given monthly.

“We partner with the school system and each school nominates one child from that school,” Johnson said. “We will select one child to be the recipient to represent all of those who are nominated. Each child who is nominated receives a certificate from the Character In Action program. The one we award it for we actually do a little presentation at the Lowndes County Courthouse. It helps us from the court standpoint because we go directly from the delinquency docket where we are dealing with children having problems to recognizing kids who are doing some outstanding work. “

The winners each get a T-shirt and a $50 Walmart gift card and more.

“It’s really just a great pat on the back for these kids and their families who are doing outstanding things.”

The award is a partnership between the school system and the court system, according to Johnson.

“Our previous Superintendent Dr. Daniel Boyd and I started the program to fins a way to recognize the kids that were doing really good things. Unfortunately in the court system and the school system we spend a lot of our time dealing with kids that are causing problems and not enough time patting kids on the back that are doing really good things, Our new superintendent, Jason Burroughs has continued that partnership. Mr. Burroughs spoke to the people at the program last night and talked about how important the program is.”

Forms are to be submitted by the first Tuesday of each month for nomination.