Smith is an Autauga County Commissioner and is a retired educator with 37 years as a teacher and administrator.

Awards presented Sunday were as follows:

Bryan Lambert swept taking First Place in Classes One, Two and Three in the Heifer Show. And his heifers took Grand Champion and Reserve Champion Heifer Awards. He also took First Place in the Steer Light Weight Class with an animal that weighed 855 pounds.

Maye took First Place in the Steer Medium Weight Class with an animal that weighed 1,090 pounds.

Hunter took First Place in the Steer Heavy Weight Class with an animal that weighed 1,215 pounds.

Smith said he believed the first livestock show he ever judged was in Lowndes County. He said working with animals is a mechanism to teach leadership, and he commended all of the youth who participated saying that there was a lot of work that went into getting a calf ready to show. He said all of the youths gained “valuable workforce knowledge.”

McAlpine thanks everyone for their attendance and announced that the winners would be competing at the Junior Beef Expo March 14-16 in Montgomery. 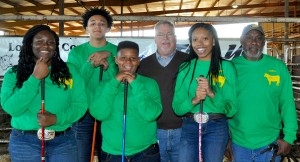