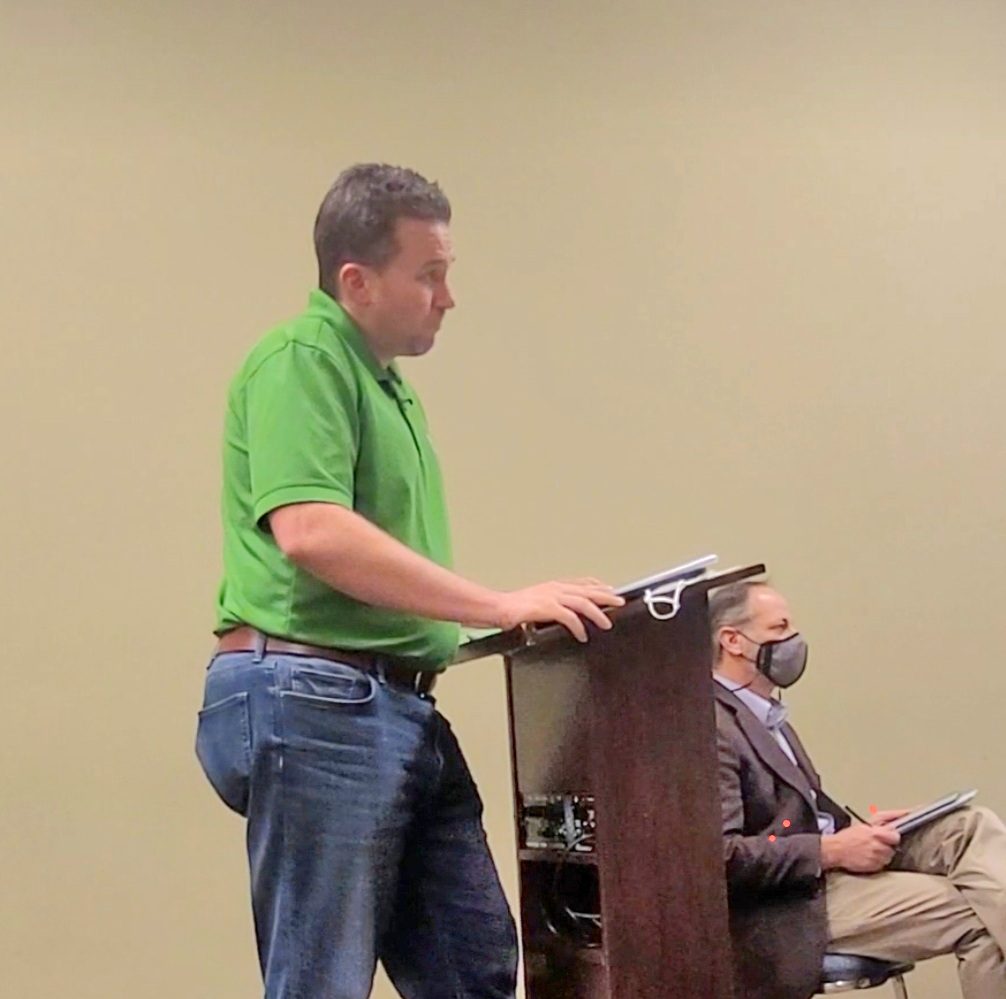 Will Barrett, a professional engineer with Civil Southeast Engineering

More than 400 residents of the Town of Hayneville might finally be on the verge of getting their failing sewer system replaced if the town receives a $12.7 million grant to replace the current system.

The funds are being requested as part of the American Rescue Act and the town council met Jan. 27 to discuss and approve the grant application before the grant deadline of Jan. 31.

“One of the problems that has plagued Hayneville for years is a failing sewer system,” Will Barrett, a professional engineer with Civil Southeast Engineering, said during his presentation to the council.

Barrett said the sewer project would consist of a complete replacement of the town’s wastewater system. The system currently in place was built in 1983 as an experimental project and relies on a combination of septic tanks and gravity sewers in combination with surge tanks, which has created a big headache for the town.

If approved, 100 percent of the project would be covered by the grant, thus the city and its residents would pay nothing for the improvements to the sewer system.

A second grant application discussed by the council is for a water improvement project.

One of the biggest concerns of city leaders and residents is Hayneville’s lack of a backup water source.

“There is one well behind town hall and if it goes out, there is no water,” Barrett said.

This scenario happened in 2008, causing the National Guard to come in and pump water to the well for it to come back online. Residents went weeks without water, something that happened again in 2013.

The project plans to remedy these problems by forming a metered connection to Lowndesboro that would provide water for $1.15 per thousand gallons if needed.

The plan includes digging a new well next to an out-of-commission well located downtown.

“This is a golden opportunity for Hayneville to make certain that their sewer system and their water system has what it needs to serve its customers well for the next 40 years and set (the Town) up in a position where it has operation money, maintenance money, and the daily replacement parts and funds,” Barrett said.

The project also includes equipment to maintain the sewer system, including a mini excavator, a trailer and a heavy-duty truck to pull it, along with other necessary tools for maintenance on the system.

“This is an opportunity that doesn’t come around ever,” Barrett said before opening up the floor for questions.

Town attorney Michael Strickland asked if the funds could be used to fix leaks or areas where water is going unaccounted for currently. Barrett said that it was “baked into the cake,” and the meter replacements had fixed some of the unaccounted water issues, but the remaining will be isolated and fixed.

Barrett and Jeremy McMath, also with Civil Engineering, confirmed the sewer grant money has been “pretty much” approved, but guaranteed approval should be received in June.

Civil Engineering will be partnering with Kribbs, an engineering company that is currently working on pump projects in Hayneville.

“I feel good. We really, really need this,” Davis said.

Strickland said this is the largest project to be undertaken that he has seen.