When other campsites were full, Chris Edgar and the Fort Deposit Arts Council opened Calico Fort campsites to Hurricane Michael evacuees from Florida with free electrical and water hookups on Wednesday, Oct. 10.

Calico Fort is the site of the annual Calico Fort Arts and Crafts Fair in Fort Deposit. And Wednesday marked the second time the Arts Council opened the park to hurricane evacuees.

Edgar said Calico Fort was open to evacuees from Hurricane Irma in August of 2017. And he said about 50 evacuees camped there at the time.

Edgar said of Wednesday’s action, “We saw the need for this. We called around to all of the RV (recreational vehicle) parks and let them know we had something available, and we offered it for free (with) electricity and water.”

He said the Arts Council was ” just trying to help those who are displaced.”

Edgar said the Calico Fort site could accommodate both camper units and tents. He said about 15 campers were taking advantage of the opportunity to stay at Calico Fort as of Wednesday afternoon.

While more actually came, he said, some found other places to wait out the storm with friends.

Edgar and the Arts Council fed the campers lunch on Wednesday with barbecue, potato salad, potato chips, brownies, water and tea with the food coming from Front Porch BBQ and Priester’s Pecans in Fort Deposit.

David Marinelli from Santa Rosa Beach in the Florida Panhandle said he was “real thankful that this is available and that they opened it up.” He said he found out about Calico Fort from another full campground when other motels and campgrounds were all full.

Roberta Paoni and her husband, Bob, also evacuated to Calico Fort. While the couple is actually from Springfield, Ill., she said they were campground volunteer hosts at Three Rivers State Park in Sneads, Fla. when they got evacuated out on Monday, Oct. 8.

She said it has been “an adventure.”

Paoni said she was actually excited about going through her first hurricane, “But it got too intense when you’re living in an RV.”

She said of Calico Fort, “This is amazing, the fact that you guys open up and do this.”

Richard Croft from Walton County, Fla. said he really appreciated the efforts of the Arts Council. Croft said he was with his uncle in a camper and car and found out about Calico Fort by word of mouth when they called other campgrounds, which were full.

She said they found out about Calico Fort from The Woods RV Park and Campground in Montgomery, which were full.

Other evacuees included Levi and Xaiphone Peacock of Fort Rucker, Ala. and their daughter, Piper, who were evacuated from an RV Park at Fort Rucker due to the storm, as well as Jim Ciocca of Tallahassee, Fla.

Evacuees wanting information about the Calico Fort campsites should call Chris Edgar at 334-328-6315.

The “Hospitality Hut” sign at Calico Fort in Fort Deposit was a welcome sight to Hurricane Michael evacuee campers from Florida, who made their way there Wednesday, Oct. 10th when other campgrounds were full. 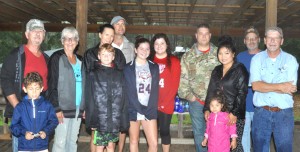 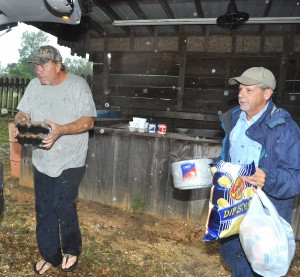 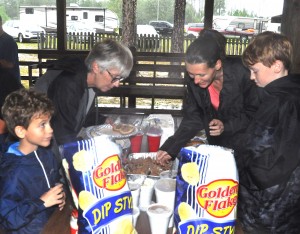