Congresswoman Terry A. Sewell of the 7th Congressional District held a Congress in Your Community Town Hall Meeting on Thursday, Feb. 22 at the Lowndes County Water Authority Building in Hayneville where in addition to water and sewer issues in Lowndes County (see related article) she discussed her views on the latest in Congress.

Sewell said she felt she was “back home” in Lowndes County. And she said, “I am very honored to not only represent the 7th Congressional District, but to have the opportunity to represent Lowndes County, my mother’s home and my maternal ancestors’ home.”

Sewell said the update on what is going on in Washington is, “Not much.” But she said Congress did pass a continuing resolution that will lead to an omnibus bill that will fund government for two years. She also said she felt it was important, “Some of us held out to make sure we got additional resources to help some of the domestic programs that are the lifeline of those we represent.”

Sewell said she felt the biggest issue on the horizon is immigration. But she said Democrats shutting down the government around that issue made it seem like it was the only issue they were shutting government down for, which she said, “It was not.” But she said she does not expect a resolution on immigration until the deadline of March 5.

She said the deal on immigration to come will include some protections on the boarder because.  But, she said, “I personally think spending $5 billion on a wall is not the answer. But I do believe enhanced security measures and giving our customs and boarder officers the resources that they need to the job that we want them to do is important.”

Sewell said the budget presented by President Donald Trump was dead on arrival because she did not feel it was adequate, and it includes an 80/20 split, which she said would be 80 percent paid for by cities and stares and only 20 percent by the federal.

Sewell said she did not know of states and cities that have the ability to put up 80 percent.

She said that relies on private infrastructure money that “doesn’t exist in some distressed communities and under-served communities.”

She said supports a $1 trillion infrastructure bill that will employ 12 million Americans and include broadband, water and sewer and which goes back to a traditional split with the federal government putting up the bulk of the cost. And she felt the economic activity spurred by that will pay back the cost over a 10-year period.

Sewell said she acknowledges that the Affordable Care Act was not perfect. But she said 150,000 Alabamians who did not have health insurance before, do now. She said, “We have to figure out a way that everyone has affordable quality healthcare… And what really concerns me about rural Alabama is access to healthcare.”

She said part of that access includes leveraging the assets of bigger cities and better health systems such UAB’s and the Baptist System’s resources to rural hospitals.

Sewell also said something has to be done about gun violence in America.

“I agree with those children from Parkland, Florida. I’m proud of those children for being so eloquent and speaking up about school safety,” she said. “You should be able to learn in a safe environment.”

She also said to educators, “You need to be an educator, not someone carrying a gun.”

Sewell said, “I think the answer is that we figure out a way that we can agree on sensible, common sense gun safety rules like closing those loopholes on background checks.”

She said she knew the public doesn’t want Congress to go back and only have “and only have a moment of silence.” 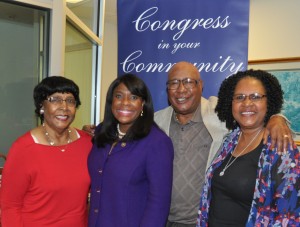