Rewards of $6,000 offered for info leading to arrest and conviction in double homicide 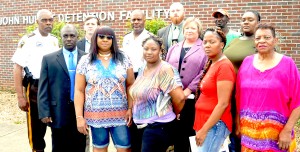 A $6,000 reward is now being offered for information leading to the arrest and convictions of whoever committed a double homicide in Mosses on Feb. 3.

Lowndes County Sheriff’s Office officials, Lowndes County District Attorney Charlotte Tesmer and family members of Frank James Hill, 26, and Antoni Markee Means, 36, who were killed in a double homicide in Mosses on Feb. 3, held a press conference at the John Hulett Detention Facility on Thursday, March 30 to announce a combined award of $5,000 from the office of Governor Robert Bentley and $1,000 from Central Alabama CrimeStoppers for information that leads to the arrest and conviction of whoever committed the crime.

On Feb. 3, the Lowndes County Sheriff’s Office received a call of shots fired in the area of Mosses Public Housing at 9:28 p.m. Patrol Deputies were dispatched and arrived on the scene at 9:38 p.m. where they observed a subject slumped over the steering wheel of a car parked on Williams Drive in the Mosses community.

After further investigation, it was determined that the occupants of the vehicle, Frank James Hill (26 years of age) and Antoni Markee Means (36 years of age), had been shot while inside the vehicle by some unknown subject(s). Both were pronounced dead at the scene

West said on Thursday, “What we’re asking is that the citizens of the county come together and take this reward that the governor has issued here and use it so we can bring these people to justice.”

Cognasi said, Hill and Means “were parked in a vehicle in the community of Mosses in Lowndes County where they we shot and killed by individuals who left the scene.”

He said information has been received that there are people in the community who know information and who witnessed the crime, but who are “afraid to come forward because of retribution.”

He said it is hoped that the rewards from Bentley and CrimeStoppers will bring “concrete evidence” to bring those people who murdered both men “to justice.”

Lee said, “It is our upmost and highest priority to get this case solved.”

He said to the community, “We understand that you might be fearful of retaliation, but we have a district attorney here who is committed to prosecute these crimes and putting these people in jail.”

Means’ mother, Cherrie, said, “I just want justice, that’s all for my son… Life has been taken for nothing, and I miss him so much.”

She said, “People are just still walking around that did it, and it’s just a shame.”

She also said that people know who did it, but are just “not talking.”

Shemiko Means said on behalf of herself and her children, “I just want justice. If you know something, please come forward… We miss their dad. I miss my husband. I just wish somebody would just come forward.”

Marvin said, “The $6,000 reward is posted by the governor’s office and by Central Alabama CrimeStoppers. Any information that you give us that leads to an arrest and conviction will be awarded that money.”

Sheriff Williams said anyone with information who doesn’t want to talk could come talk to him.

Cognasi added that Means was a disabled veteran who served his country in the U.S. Navy with honor and who had two children. He said both Means and Hill had good jobs. And now, he said, the children of both men have no fathers.

District Attorney Tesmer said she asked the governor for the reward which was received this week.

She said, “We are happy that we got the reward, but we are also anxious for someone to come forward. And hopefully this will help is with that effort.”

By Angie Long Doris McQuiddy can’t remember when she didn’t have a special place in her heart for the most vulnerable... read more