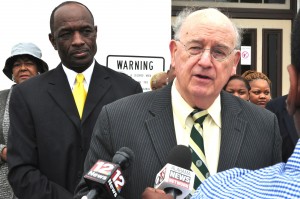 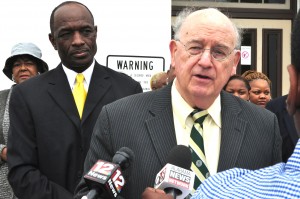 By Fred Guarino
The Lowndes Signal
Alleging voter fraud, Charlie King Jr. has filed a lawsuit in Montgomery County Circuit Court that seeks a contest and recount of the March 1 Democratic Party Primary election for the Lowndes County Commission District 2 seat.
King, represented by his attorney, Julian L. McPhillips Jr. of Montgomery, held a press conference in front of the Lowndes County Courthouse Friday to announce the lawsuit filed on Thursday, April 14.
While the lawsuit is a complaint for declaratory judgement, writ of mandamus, and injunctive action, “All we are trying to do is get this hearing and determine whether or not the recount and the contest is due to be heard,” McPhillips said.
Defendants named in the lawsuit include, Eli Seaborn, chairman of the Lowndes County Democratic Executive Committee, the Alabama State Democratic Executive Committee, Alabama Secretary of State John Merrill and District 2 Lowndes County Commissioner Carnell McAlpine.
“We think it is fundamental democracy, fundamental fairness, fundamental due process of law.  And we say that one man, Mr. Seaborn and his committee can’t just ignore the law and ignore the contest. There are legitimate grounds to contest this.”
McPhillips, who spoke on King’s behalf explained, “Well there were highly improper practices observed and recorded by operatives of his opponent (McAlpine) in this election that changed the result of the election, we strongly believe.”
He continued, “We’re bringing this challenge to set aside and have, first of all, a recount of the contest, and then from there,  either have Mr. King declared the proper winner or set it for further… maybe even another election.”
McPhillips said of the election, “It was close enough that we think a recount and a contest could very well change the result of this election and cause Charlie King Jr. to be elected County Commission District 2 Commissioner.”
King served on the Lowndes County Commission for 28 years prior to losing to McAlpine in 2012.
McAlpine narrowly defeated  King 689 votes to 636 for County Commission District 2 on March 1. King picked up one provisional vote to zero for McAlpine to make it a 52 vote win for McAlpine with 689 votes to 637 for King.
According to McPhillips, King alleges “operatives” of the campaign for McAlpine were observed engaging in “improper activities including the improper gathering of absentee ballots and the notarizing of absentee ballots not in the presence of the absentee voters themselves,” as well as the gathering of unsealed absentee ballots and causing them to be cast and counted as part of the total 820 absentee ballots for all elections.
He alleges County Commission District 3 candidate Brenson Crenshaw, “a friend of Mr. Alpine’s” had access to about 176 ballots delivered from the post office to the absentee ballots managers office. And he alleges there are witnesses who can testify to “rampant voter fraud, which overcame the will of the voters of Lowndes County.”
McPhillips said King alleges that as many as 60 absentee ballots mailed or delivered to absentee ballot managers were never counted.
“He (King) thought and believes that the election was taken from him very wrongfully whether you call it stolen or otherwise,” McPhillips said.
McPhillips went through a timeline in which on March 10, he said, King and his attorney went to Seaborn’s home and filed his contest and a request for a recount along with a check for $2,050.  Among items Included, McPhillips said, were a certified affidavit from King stating how the misconduct had changed the result of the election in addition to affidavits from others.
He said Seaborn gave King a receipt,  including a copy of the check and noted that it was for the recount and a contest of the election.
He said Seaborn gave King a copy of document certifying the election results and gave back to King the contest of the election stating” they would need it for the hearing.”
McPhillips said Seaborn and committee failed to meet within five days and King and his attorney electronically mailed several letters on March 17.
McPhillips continued, “We say in this suit that the Lowndes County Democratic Executive Committee failed to give Mr. King  the hearing concerning the contest he filed… failed to give notice to him of any hearing.”  He also said it was also misrepresented to Nancy Worley, chairman of the state Democratic Executive Committee, “that Mr. King did not field a contest with the Lowndes County Democratic Executive Committee.”
McPhillips said after the state turned down King’s appeal because a hearing was not held first, “We say he has exhausted all his avenues of appeal  within the Lowndes County Democratic  and the Alabama State Democratic Executive Committee and therefore he’s left with no choice but the pursue this election challenge… something which we think has sort of been impliedly encouraged by the state committee in statements that Ms. Worley and other have made to the press.”
McPhillips said, “We filed this in Montgomery by the way because there are two defendants in this case who are residents of Montgomery… the state executive committee and the secretary of state. We believe we have venue on those grounds. Also (we) believe we have venue because certain things happened in Montgomery when they denied him a hearing that gave rise to this case.”
McPhillips said by filing the case in Montgomery, it  “will take pressure off of any local judge, hopefully.”
He said a motion has been filed for an expedited hearing and all of the defendants have been served.