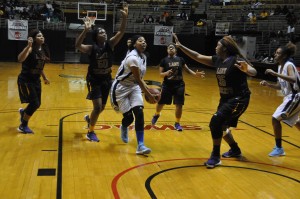 Central’s Kentravious Dudley 23 and a Calhoun Lady Tiger were in action Friday in the Class 2-A semifinal regional action at the Dunn-Oliver Acadome on Friday. 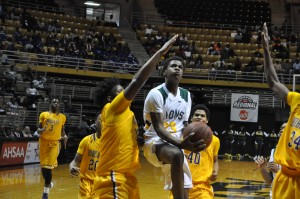 By Fred Guarino
The Lowndes Signal
The road to 2-A Alabama High School Athletic Association State 2A Basketball Championships came to an end for both the Calhoun Lady Tigers and the Central Lions at the Dunn-Oliver Acadome in Montgomery on Friday.
The Lady Tigers fell to R.C. Hatch 38-26 and the Central Lions fell to R.C. Hatch 93-76 in semifinal regional games. But both Lowndes County teams had their chances.
The Lady Tigers pulled within four points of the Lady Bobcats in the fourth period of their contest 26-30, and the Lions pulled within two points of the Bobcats in the fourth quarter of their game 62-64.
Toni Young led the Lady Tigers with 13 points. Kentravious Dudley led the Lions with 16 points, Tariq Aaron scored 13 points, Jaquez Bolling scored 11 points and Diamonta Johnson scored 10 points.
Perhaps the biggest disparity in the Lions loss to the Bobcats was that Central made 18 of 32 free throws while the Bobcats made 34 of 53 free throws.
Calhoun Lady Tigers head basketball coach Eddie Howard said following his team’s loss by eight points after pulling within four points of their opponents twice, “Close but no cigar.”
He said, “We did not play basketball today. It was not a team effort. We didn’t play our best game… not taking anything away from R.C. Hatch. They wanted it more.”
However, Howard said, “All in all, we had a good season. It should have been a better ending.” He said his team played hard and well all season long. He said there were just a couple missing pieces the team needs to work on and, “Hopefully in the off season we can fine tune things and get to where we can get over this hump here at the regional.”
Lions head basketball coach Brian Coleman said following his team’s loss, “I’m proud of the team. They didn’t quit on me today. We had it within two, but fouls killed us. They hit their free throws.” He also said the Lions had four players foul out of the game.
Coleman also said his team “ran out of gas.”
He said of four seniors on the team, only Jatavius Robinson was a starter and that he has a good core coming back.
However, he said, “The bar is always high for Central High in basketball. So, we plan on being here again next year and hopefully making it a little farther next year.”
According to C2C Schools the Lions ended the season with a 12-8 overall record and went 7-0 in area play. The Lady Tigers ended the season 23-6 overall and went 6-0 in area play.