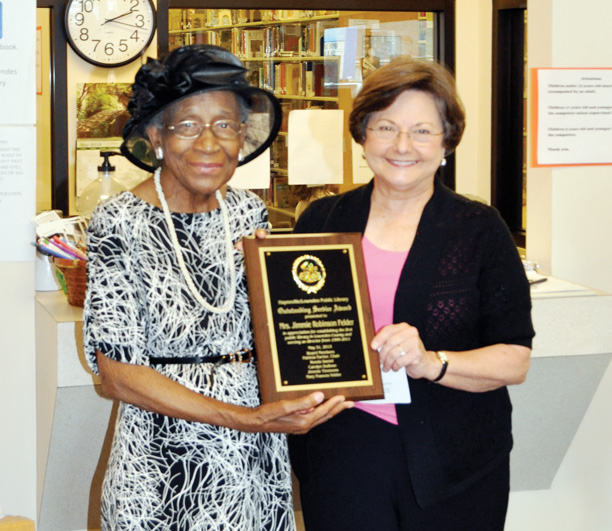 Jimmie Robinson Felder, left, with a portrait and outstanding service award from Patricia Farrior, chairman of the Hayneville-Lowndes Public Library Board of Trustees.

The Hayneville-Lowndes Public Library Board of Trustees recognized library founder Jimmie Robinson Felder and dedicated the library conference room to two late board members, Bernice Adams and Elizabeth Marlette, in a ceremony attended Friday by local leaders, family and friends.

The event marked the 23rd anniversary of the library’s founding, as well.

“We were the last county in the state to have a public library,” Felder said. “And since I’m from this county originally… I live in Montgomery …  and since I had three degrees in library science, I decided to come and set up one.”

Felder said she wanted Lowndes County to have a public library, which was originally located in another building. She said she was “grateful” she was able to get a library for the county in Hayneville since she was a certified librarian who was born there.

She retired as head librarian at Carver High School in Montgomery.

She also said her father was a blacksmith and her mother was a substitute teacher.

Felder said she went to the Lowndes County Commission to get a resolution passed to set up a library and for property for the library.

“I started this one (library) from book one. I think there are more than 23,000 books that are cataloged now,” Felder said.

Jim Smith, a library consultant from Alabama Public Library Service, was among those on hand for the recognition.

“I’ve known Jimmie (Felder) for many, many years and I’ve seen the progress of the library. It’s really exciting that they’re in this building now,” Smith said.

Hayneville-Lowndes Library Board of Trustees Chairman Patricia Farrior (wife of Lowndes County Commissioner Dickson Farrior) said that without Felder,  “this library would not be here.”

Farrior unveiled a portrait of Felder, which hangs over the library office and is visible as one enters the facility. She also presented Felder with an Outstanding Service Award for founding the library and serving as library director from 1990 -2011.

Daniel said he was county agent when the library was founded. And because he was so appreciative of what Felder had done, he said he made a shelf for the library when it was started.

McAlpine presented a letter of appreciation from the commission to Felder.

Patricia Farrior recognized two late original board members who were with Felder when the library was started, Bernice Adams (Felder’s sister) and Elizabeth Marlette, with the dedication in their honor of the library’s Adams-Marlette Conference Room.

Farrior also presented certificates of appreciation and unveiled portraits, which will hang in the conference room in honor of Adams and Marlette, as well.

“Thank you for recognizing our mother,” Fannie Adams said. “She was a dedicated educator. She was an educator in the Lowndes County School System for over 37 years. She and my aunt strongly believed in educating our youth,”

Sonny Marlette, widow of the late Elizabeth Marlette said, “I would like to just say thank you very much for this. I can’t tell you how much it means to me.”

Marlette announced that he was about to become a great-grandfather and said, “I know that Liz would be so happy to be here too.” 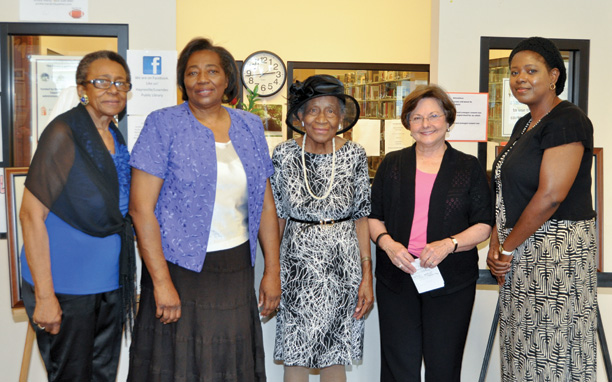 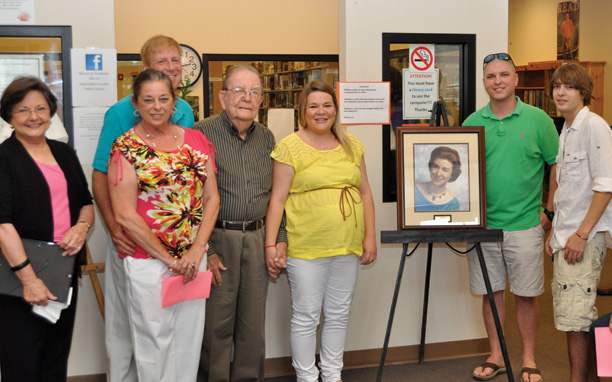 On hand for the dedication of the Adams-Marlette Conference Room at the Hayneville-Lowndes Public Library on Friday in honor of late board members Bernice Adams and Elizabeth Marlette with accompanying portrait of Marlette are from left are, from left, Patricia Farrior, library board of trustees chairman, and family members Audrey Marlette, Bill Marlette, Sonny Marlette, Sara Kreder, Jon Kreder and Reid Cleveland. 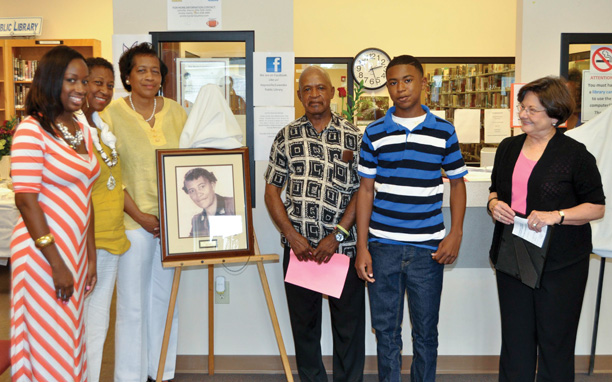 Friday marked a special day in the history of the Hayneville-Lowndes Public Library. Not only was library founder Jimmie Robinson Felder recognized on its 23rd anniversary but the library’s conference room was dedicated in honor of late board members Bernice Adams and Elizabeth Marlette with accompanying portraits. With the portrait of Adams are, from left, members of the Adams’ family, Jasmine Adams, Jemmie Jones, Fannie Adams, G’Nald Sharpe and Reginald Sharpe, as well as Library Board of Trustees Chairman Patricia Farrior. Not pictured is Mrs. Kuby Hodge of Atlanta, Ga.