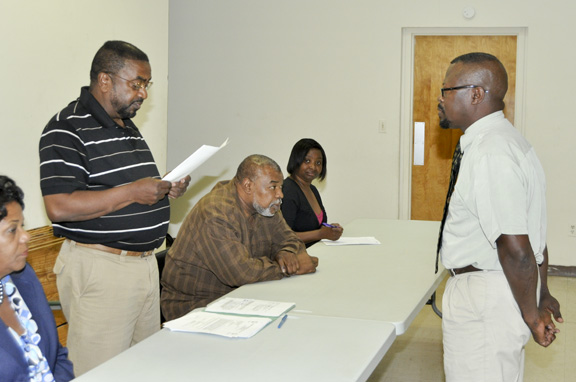 The White Hall Town Council filled the vacant seat left by the resignation of Council member Moses Bandy with the appointment of Glenn Mallard at a special called meeting Thursday night, but the appointment was not without questions.

Upon a call for the vote, Walker, Barnfield and Baker raised their right hands to indicate a “yes” vote while Council members Audrey Peterson and Walter Bates did not.

When asked later if he abstained, Bates said he did not know. Peterson said she “did not vote.”

Peterson asked Walker if other names were brought to the attention of the town clerk to fill the Bandy’s unexpired term.

Walker replied that he received two letters from other individuals, who showed interest, but his recommendation of three was Mallard. He moved on to declare the motion to appoint Mallard carried.

When Bates said he did not receive any names for consideration to fill the vacancy, Walker said the names were directed to him.

“I don’t think we are in line with what we discussed at the last meeting,” Bates said. He said it was his understanding that everyone agreed that five names would be submitted.

Walker continued on to administer the oath of office to Mallard.

Ruby Rudolph, a citizen from the audience, questioned why another person was not appointed and asked if the council had to approve Walker’s recommendation.

“We have,” Walker replied. He explained that Bates and Peterson “did not vote.”

Rudolph said Mallard did not attend council meetings and told Walker, “What I’m talking about is common sense.”

Walker replied, “The procedure was carried out as in the handbook, and so I don’t know if that is common sense or not, but that’s the procedure we used.”

When asked after the meeting why he wanted to serve on the council, Mallard said, “I really want to be on the council to help the city of White Hall. Right now the city hasn’t grown, and I’ve been here over 30 years or longer.” He cited his 30 years experience working with U.S. Food in Montgomery around people and being involved in decision making, which he felt enable him help the town of White Hall.

“And I will do my best to do what it takes to try to help the mayor and the rest of the people on this council make White Hall grow,” Mallard said.

He said he works in food distribution and has held shift management and safety coordinator positions.

“I think Mr. Mallard is a very good addition to the council,” Walker said. He said he did extensive evaluation and felt Mallard would be a “team player to help move the town forward.”

The council will hold its next regular meeting on Thursday, June 6.