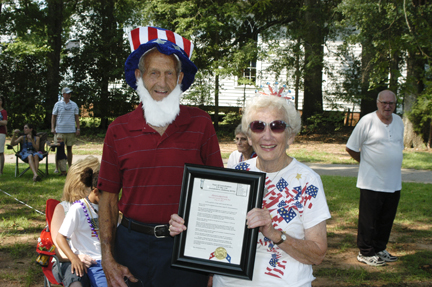 Lowndesboro Mayor Rick Pate honored Jean and Caswell McCurdy, a longtime member of the Lowndesboro Town Council, with a proclamation in their honor.

The annual Fourth of July celebration in Lowndesboro continued a more than 20-year tradition with an added surprise on Monday.

Pate said small towns lose so many great people like the McCurdys that he wanted to be sure that he did a better job of recognizing them for their years of hard work and service to the community.

According to Pate, Caswell, 80, was born in Lowndesboro and has been farming since the age 13.

Jean, his wife, 82, was a high school teacher at Hayneville, Lanier, Robert E. Lee and Morgan Academy and has been associated with Lowndes Academy since 1966. She is a member of the Lowndesboro Landmark Foundation and Lowndesboro Heritage Society.

As to the tradition of the Fourth of July celebration in Lowndesboro, Pate said, “To me, this is what small town America is. I mean you can be patriotic here. You can show your love of country.

And little towns… we can stop the traffic for 30 minutes and let the children and dogs and horses walk down Main Street.”

He said, “I think this is what the founding fathers pictured us doing on July 4th to celebrate.”

The tradition has involved the Alabama Air National Guard Color Guard from the 187th Fighter Wing at Dannelly Field in Montgomery for about 25 years, according to Tech. Sgt. Betty Findley, NCOIC (non-commissioned officer in charge) beginning at a little field by the post office.

“It means so much,” said Findley. “It makes the Fourth of July for me. This town… they’re so patriotic, and they make us feel good about being in the military and serving and doing what we do.”

In addition to the parade and presentation of flags that have flown over America from before the American Revolution, there were speakers, patriotic songs, military songs, prizes and refreshments.