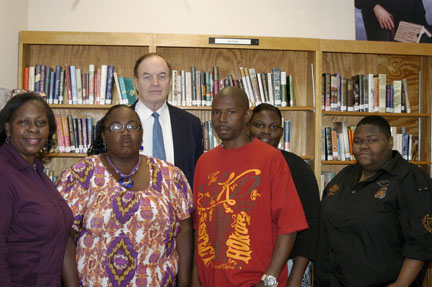 Instructor Mary Yelder, far left, and her GED class from the RITE Center in Hayneville meet U.S. Sen. Richard Shelby during his visit to Hayneville on Tuesday. From left are Jacquelyn Coleman, Larry Caldwell, Kimberly Means and Alexis McCall.

Helping people to help themselves was the tone of U.S. Sen. Richard Shelby’s visit to the Hayneville/Lowndes Public Library on Tuesday, And he offered a helping hand in that direction to the town of Hayneville.

“The people have got to help themselves, but you are helping yourselves right here,” said Shelby.

Shelby said, “Right in this county your unemployment is too high. It’s been too high. You’ve got structural problems here. I’ve supported a lot of good programs that will help, and I’ll continue to do that.” But he said, “There is nothing better than education and infrastructure.”

Bell thanked Shelby for including the Black Belt in the Delta Regional Authority, which she said resulted in two grants for Hayneville.

Shelby explained the DRA was for the Mississippi River area, but also said the Black Belt had similar conditions and was deeply challenged.

When Shelby asked Bell what she was working on, she told him, “We want to build a community center for Hayneville.”

She said the center would allow children a place to gather for recreation and a place for a Student Teacher Enrichment Program in which children ages 1-3 are being educated before they go to Head Start.

She said that program is expanding and has outgrown its building. She said at the same time, the town would have a community center with a gym open after school.

Bell said she wants to build the community center at the park on Peoples Street where the city owns 40 acres. She also noted that the town has a grant application in to the U.S.D.A. for the project.

Shelby asked for a copy of the application. “We’ll try hard to help you,” he said. “Because it will help you to help your people… in a meaningful way and help children get an education.”

When asked about future stimulus for counties like Lowndes, Shelby said, “You know most stimulus packages don’t work. If they work it is just a short time.”

He said, “It’s like the big one — we spent nearly a trillion dollars. It hasn’t helped unemployment.” He said, “What we need… The best we can do is to create infrastructure that is good libraries, good roads, good schools and help people like that to help themselves.”

He said of the GED program, “These are the programs that mean something. They mean a lot more than, you know, sending a check to any county whether it Lowndes or Tuscaloosa… People have got to help themselves, and what we need to do is give them the conditions under which they can do that.”