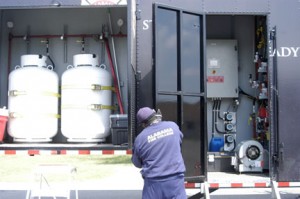 Derrick Swanson of the Alabama Fire College set up the Mobile Fire Training System in the parking lot of the Mt. Moriah #2 Church in Mosses in preparation for firefighter training.

By EASON FRANKLIN
The Lowndes Signal
Lowndes County’s emergency workforce will soon get to participate in a once-in-a-lifetime experience.
The Alabama Fire College and Personnel Standards Commission have financially supported a Mobile Fire Training System (MFTS) and its use to train firefighters across the state.
The MFTS arrived in Mosses Aug. 9 and is being positioned at the Mt. Moriah #2 Church in Mosses, with the church’s approval, to train local firefighters.
The system consists of a trailer with front and rear burners, a rooftop capable of inclining, an internal chamber capable of being raised to a second story, smoke capabilities, forcible entry training and emergency shutoff buttons and an exhaust system for safety.
This will be the first time the MFTS is being brought to Lowndes County and local residents are being encouraged to come during the week of Aug. 16-22 to “support and watch what firefighters have to go through as far as training,” according to Mosses Fire Chief Eric Hall.
“I’m trying to better my firefighters,” said Hall. “I want to see the department reach its highest peak.”
The MFTS is specifically firefighter oriented, although other emergency responders, public officials and citizens can come out and tour the MFTS and experience the intense heat it can produce.
The system allows firefighters to create and re-create specific scenarios to receive proper training for virtually any fire emergency, according to Swanson.
“This is a training support tool where people can see where there tax dollars are going and how they are being put to good use,” said Swanson.
Swanson added if the unit is used right, firefighters can receive their structural training for the year. Each firefighter is required to receive 12 hours of structural training per year for the Insurance Service Office (ISO), according to Swanson.
When records of this training course are reviewed by the ISO, it may cause local homeowners and building insurance rates to drop.
You Might Like

By EASON FRANKLIN The Lowndes Signal Some local Lowndes County school children will soon have newer, safer methods of getting... read more