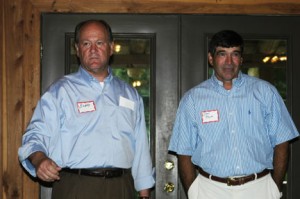 Congressman Bobby Bright recently announced that America’s national security is equally as threatened by agricultural problems as it is by not having a strong military.

The announcement came during a fundraiser at the Southern Sportsman’s Lodge, where Bright spoke to Lowndes County residents and farmers about the issues he will face in the next session of Congress.

“We have to be business and agriculturally friendly,” said Bright. “No clear cut formula to determine the price of peanuts is just one problem farmers face.”

The Congressman addressed the issue of balancing the national budget by giving examples of what and does not work in Washington.

Borrowing money from various resources to fund government programs is one goal Bright said he will work to discontinue.

According to Bright this will eliminate racking up more national debt.

“Raising taxes is another thing I will not do,” said Bright. “But, there will need to be cuts and this will take tough leadership and commitment across the board.”

During his term as Mayor of Montgomery, Bright was responsible for balancing the city’s budget based off previous year’s figures.

“Introducing a balanced budget bill is something that we need to practice in cities, states and the federal government,” said Bright.

Currently Bright works with a pay-as-you-go, or Pay-go, plan to control out of control spending. This means if the funds are not immediately available, or if funds cannot be pulled from another internal resource, then no spending will take place.

On the subject of immigration, Bright said he believes it is the federal government’s responsibility to address these issues directly and to enforce policy.

Bright argued the only reason Arizona has their current policy in effect is due to lack of leadership from the government on the issue.

“We can’t police the world. We need to prioritize our needs,” said Bright. “We’ve got the laws…we’re just not enforcing them.”