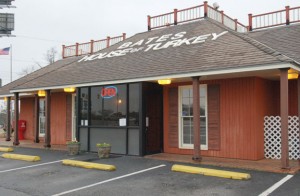 Bates House of Turkey has been a Greenville fixture for 40 years.

When I-65 rerouted traffic from Highway 31 in 1970, engineers did not take into account the Bates Turkey Farm. They should have.

40 years later and 12 miles down the road, Lowndes County native Bill Bates recently marked his restaurant’s anniversary with a celebration of friends, family and customers.

“I’ve been in Lowndes County over 36 years and we’ve always enjoyed eating there,” said Howard Hooks of Braggs. “Mr. Bates’ restaurant is a tradition.”

The Bates House of Turkey in Greenville is a well-known state landmark that brings locals, travelers and state officials alike.
It is home to one delicacy: turkey.

The restaurant, located at exit 130 off I-65, carries a variety of turkey, soups, vegetables, sandwiches and related dishes.
Bates says the secret of the company’s success is that the turkeys eat whole grain feed and are placed in a stable environment. “Our turkeys are well fed and well cared for,” said Bates.

The establishment is well known for being one of the first businesses along the Interstate though few realize the extensive history behind Bates and his family’s farm.

In 1828 the Bates family traveled through Alabama by mule wagon alongside a caravan, settling in Lowndes County when their means of transportation broke down.

“The people of Lowndes County are good people.” said Bates a resident of Ft. Deposit. “My mother was born and raised in Mt. Willing.”

The family raised turkeys until the it “hatched” The Bates Turkey farm in June of 1923 with a mere nine turkey eggs.
Until 1941, Bates worked at a café and bus stop until he volunteered as a pilot and instructor for the Army Air Corps.
Bates said he began working with the family business after arriving home to sell baby chicks and chickens until 1968 when the family sold strictly turkeys.

“I knew the surrounding area of Greenville would grow as it did,” said Bates. “Our restaurant is the lifeline of the town.”

The Bates family patriarch has met many public officials over the years becoming a state-wide fixture at Thanksgiving. Each year in celebration of the holiday, a turkey raised on the Bates Turkey Farm is pardoned by the Governor of Alabama. Republican or Democrat, the bird is happy for a reprieve.

Now the farm, which has been in operation for over 86 years , is operated with the help of the Bates children, Jane Dent, Rebecca Sloan, John, Thomas and Pete Bates. 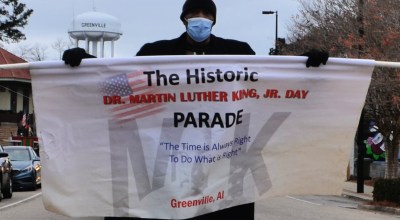