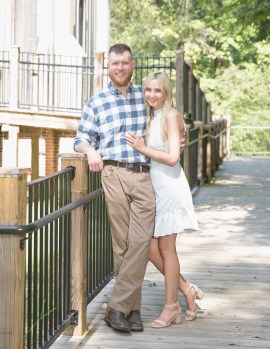 Colt Perryman and Victoria Grindle were forced to relocate their Saturday wedding to Lowndesboro after storms ravaged Selma on Jan. 12. 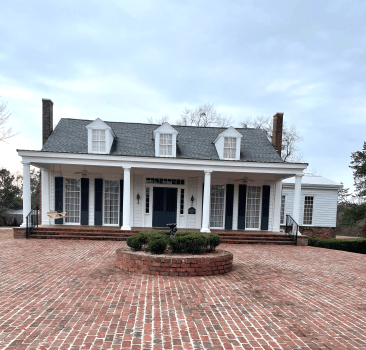 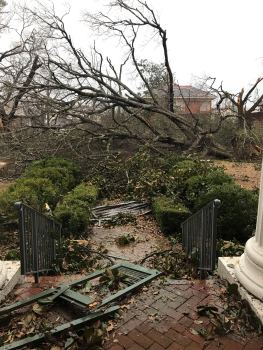 Victoria Grindle chose Sturdivant Hall as a wedding venue because it is the “prettiest place in Selma” and was forced to relocate the ceremony after a tornado damaged the facilities’ grounds Jan. 12.

Colt Perryman and Victoria Grindle were all set to walk the aisle at their wedding in Selma, originally scheduled for Saturday.

But when storms ravaged the city Jan. 12 – just over a week before the couple planned to say, “I do,” on the grounds of historic Sturdivant Hall, the couple had to change course.

On Jan. 13, parents and planners shifted into high gear, searching for an alternate venue and relocating the ceremony to nearby Marengo in Lowndesboro.

“God put everybody in the place where [the wedding] needed to be,” said Audrey Grindle, mother of the bride. “I work with a great team. The flowers, the caterer, the cake lady, the photographer, the tent company, everybody was willing to pick up and change gears.”

According to Audrey, tornados left the structure at Sturdivant Hall largely untouched, but the grounds sustained damage, too much to repair before the outdoor wedding.

Victoria grew up in Selma, Audrey explained, and had always planned to be married there.

“We are originally from Selma,” Audrey said. “Her heart is still there, so she wanted to go back to Selma to get married. She wanted the vintage antebellum theme, which Sturdivant Hall provided.”

Victoria said she felt heartbroken when she realized her dream wedding would not take place in Selma.

“I’m originally from Selma, and that’s my hometown,” Victoria said. “I always knew I wanted to have my wedding there and Sturdivant Hall is probably about the prettiest place in Selma.

“When I found out I wasn’t able to use Sturdivant Hall, I cried that whole night. [Relocating the wedding] is very hectic and stressful. I’ve been worried, but luckily, my mom was able to find a new place. I’ve been trying to stay calm, but I’ve also felt very frantic in my head.”

As Audrey searched for an available venue, she heard about Marengo and learned the mid-19th century raised cottage was available for Jan. 21.

“I talked with Laura Howard [with the Lowndesboro Landmark Foundation], and she said it was available,” Audrey said. “Victoria saw it last Saturday. I think since she’s seen Marengo house, she’s feeling much better.”

After settling on Marengo, both families worked to notify wedding guests of the new location and according to Audrey, most still plan to attend.

“I couldn’t have done this without that team of people,” Audrey said. “The caterer usually services Selma and would probably not typically serve Lowndes County. Everyone pretty much said, ‘I will go where you need me to go.’”

Victoria said the shift has been hard, and emotional, but Perryman has remained calm and brave for her, she added.

Originally planned as an outdoor event, showers may shift the wedding indoors, Victoria said. Marengo offers indoor spaces where the ceremony can take place if needed.

While not ideal, the circumstances make for an interesting story the couple can share with children and grandchildren.