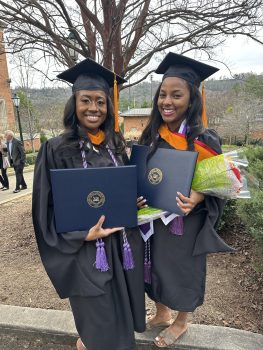 Roneshia Rudolph – Meadows, a Central High School graduate, and Stevonica Logan, a graduate of The Calhoun School, recently graduated with their Masters of Science in Family Nurse Practitioner from Samford University where they were also inducted into the Gamma Eta Chapter of Sigma Theta Tau International, a global nursing organization giving nurses opportunities to advance world health and celebrating nursing excellence in scholarship, leadership, and service. 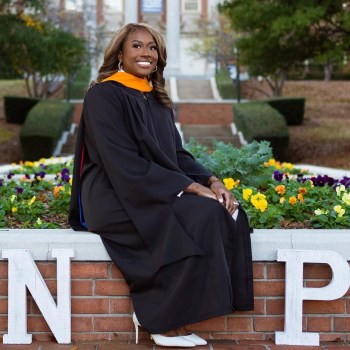 The Lowndes County natives completed the program together after gaining their registered nursing credentials around the same time but through separate schools and under similar, yet individual inspiration.

Central Hayneville High School graduate Rudolph-Meadows began her journey toward a medical career around age 14 after losing her sister Raelynn to cancer.

Rudolph-Meadows earned her Bachelor’s Degree in Nursing at Tuskegee University and worked as a travel nurse for two years before refining her focus toward becoming a nurse practitioner.

“Eventually I figured out that being a nurse practitioner was the best path for me,” she said. “It allowed me to still have that direct patient interaction and then eventually work in a provider role.”

Stevonica Logan graduated high school at The Calhoun School, then achieved her registered nursing credentials by earning an Associate of Science Degree in Nursing from Lurleen B. Wallace Community College. Logan went on to earn her bachelor’s degree in Nursing from Jacksonville State University.

“Seeing my dad become ill and take a turn for the worse made me realize I wanted to do something to help people,” Logan said. “After becoming a nurse, I knew that I wanted to care for my patients at a higher level, so I began working to become a nurse practitioner.”

Logan also worked as a travel nurse while pursuing her post-graduate education. She also worked in the Air National Guard, deploying to Southwest Asia during the first term of her master’s program.

Completing the program together helped both women stay motivated, serving like a balance for one another and lifting each other up through the difficult times.

“I think of us as a balance,” Logan said. “When one half of the balance goes down, we kind of even out each other. Having Roneshia was vital to me in accomplishing the program because when one of us gave out, the other one could help. We picked each other up.”

Both graduates are preparing to pass licensing requirements through the Alabama Board of Nursing and each continues to refine their focus towards determining their specific medical discipline in which to practice.

Rudolph-Meadows, who recently moved to the Atlanta area with her husband Courtney, is still undecided, but is considering a practice involving pediatrics or women’s health and hopes to one day return to Lowndes County to care for underserved people there.

Logan also continues to refine her focus and hopes to one day provide care to the citizens of Lowndes County.

“I would like to go into pediatrics, but it’s whatever God has in store for me,” Logan said. “I do plan to return to Lowndes County and give back to help the minorities there.

“I would also like to encourage kids there, to know they can go farther and pursue whatever it is they want to do. Often, we are counted out because we have limited resources and access, but I want them to know that doesn’t stop anything. They can become whatever they want to be.”