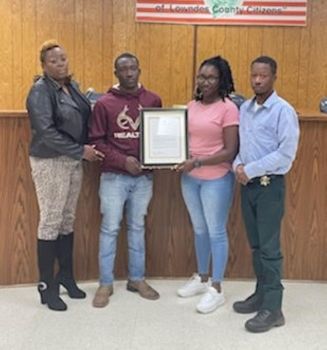 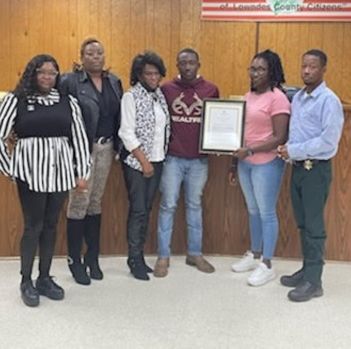 The Town of White Hall commended Sherita White and her son, Keddrick Hall, on Dec. 12 for their actions and bravery while assisting the White Hall Volunteer Fire Department in attempting to save their neighbor, John “Pooh” Whetstone during a March 1 house fire.

Lowndes County Emergency Management Agency Director Rodney Rudolph presented White and Hall with the commendation at a meeting of the Lowndes County Fire Association, recognizing their bravery, dedication and willingness to go above and beyond, putting their lives in danger to save an individual who everyone in the White Hall Community called family.

“I’ve helped with fires before, but never with somebody I knew and grew up with,” White said. “I’ve never had to go in and try to save somebody who I grew up with.”

Whetstone was a beloved memory of the community, which continues to mourn his loss.

According to White, Hall was outside around 9:45 p.m. when he noticed what appeared to be a fire inside Whetstone’s home.

Without hesitation and regard for their own safety, wrote White Hall Mayor Delmartre Bethel in the commendation letter, the two entered the home and attempted to rescue Whetstone.

“Keddrick told me to come and help get Pooh out of the house,” White said. “We went over and knocked, but we didn’t get an answer. I went around to the backside of the house and saw that the fire was in the kitchen. I was thinking he was going to come to the door, but when he opened the door, he was kneeling on the side of the sofa.”

Hall kicked in the door and White recalled later flames coming toward them. Having formerly served as a volunteer with the fire department, she knew the danger they faced in attempting the rescue.

“We went into the house and drug him to the door,” White said. “It was like something exploded in the kitchen. We got him out, but he was unconscious. We started CPR until the paramedics arrived, but we were unsuccessful in reviving him.”

Rudolph and White Hall Volunteer Fire Chief Sharon Thomas commended the mother and son’s actions, recognizing their rescue attempt was performed in an unknown dangerous environment that could have been detrimental to themselves.

Rudolph said he hopes to continue efforts to recognize local citizens each year as a way to say, “Thank you” for going above and beyond the line of duty to help their community.