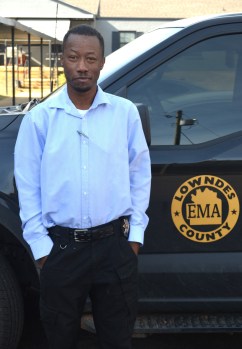 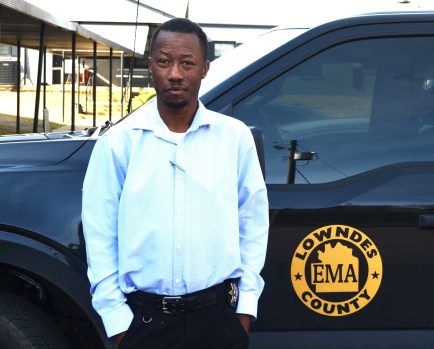 When disaster hits Lowndes County — whether by storm, accident, or another cause — citizens and officials call Emergency Management Agency Director Rodney Rudolph.

He responds to emergencies with a plan of action from early in the morning to late and night and most times in between.

“You have to have a plan of action,” Rudolph said. “I have responded to many scenarios. My thing is, I try to plan for the worst case and hope for, pray for the best.”

“Rodney worked his tail off during the recent water [service outage],” Farrior said. “When I contacted him about the situation, he was already on top of it with all the services he could find available, trying to restore water for the people, early in the morning and late at night. He’s always looking for grant funding and doing things to improve the county.”

Rudolph strives to give back to the community where he lives with his wife Rashelia, and volunteers as a positive role model for young people.

He confessed that he didn’t always understand the importance of giving back and began a career owning construction and trucking businesses by pursuing financial gains.

“I never wanted to work in Lowndes County,” Rudolph said. “But after losing my daughter [Raelynn] to cancer, I looked at things differently. I see how some of these kids have nobody and how a lot of people are leaving Lowndes County, making other places better. And I was one of the problems.”

Raelynn’s death felt like a wakeup call to Rudolph, who had graduated from Central High School in Hayneville, and volunteers there today as head coach of the school’s softball team and assistant for football and basketball.

“We try to teach discipline,” Rudolph said. “We show them if they succeed in sports, they can earn a chance to move on to college and get an education to be whatever they want to be. Kids have nobody to look up to, and that’s the point I was at in high school. I didn’t think anything was going on, but when I was led back to Lowndes County, I wanted to make a difference.”

As EMA director, Rudolph deals with whatever emergencies occur, sometimes juggling a fatal car accident, tornado damage, and a neighborhood with widespread utility outages, all at the same time.

“I’ve been called a couple of times, when commissioners will tell me to find out what’s going on,” Rudolph said. “So, I’ll go find out if I’m not already aware.”

Rudolph said his power is limited and he relies on community from communities and the agencies which serve them.

He can’t fix every problem, he added, but he can connect information and resources and ensure agencies follow established guidelines for emergency management.

Rudolph says he works to help wherever he can and looks for ways to make things better for the next emergency.

“During the recent water outage, I got a call from a lady in Letohatchee,” Rudolph said. “She broke my heart when she told me she was on disability and didn’t have any water.

“It broke my heart. I’m not in this job for the money. I get more enjoyment out of helping people than anything.”

Rudolph said he’s experienced some difficult events and recalled saving a person from a burning house, freeing victims trapped in their vehicle after an accident, and witnessing a child die in another vehicle accident.

According to Farrior, Rudolph has accomplished much, working as the EMA’s only employee to provide services.

“He’s done a good job and he’s there whenever we need him,” Farrior said. “He doesn’t have any help. He’s done everything by himself, and people have benefited from what he’s accomplished.”