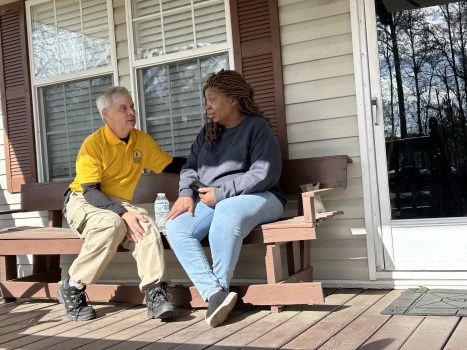 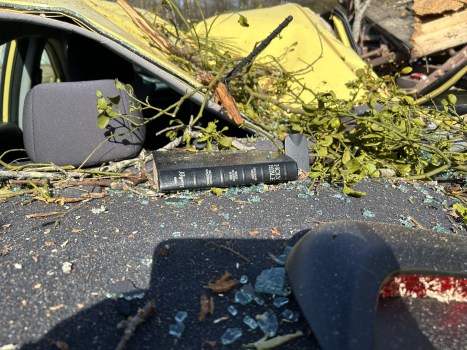 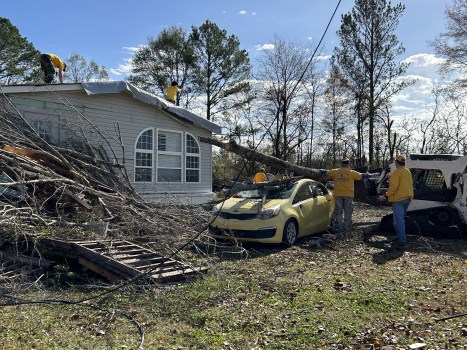 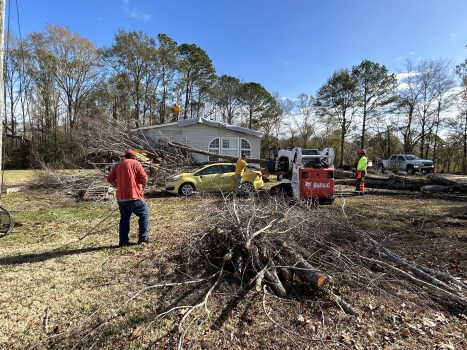 In the Flatwood community near Montgomery, 55 of the 60 homes sustained damage from an EF-2 tornado which landed in the early morning hours of Nov. 30. 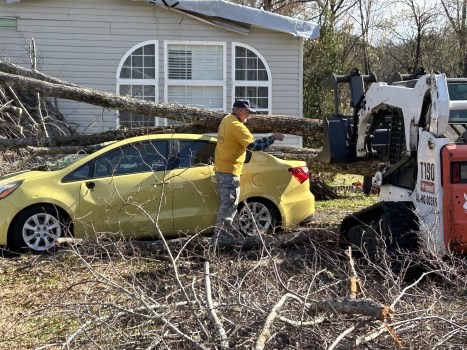 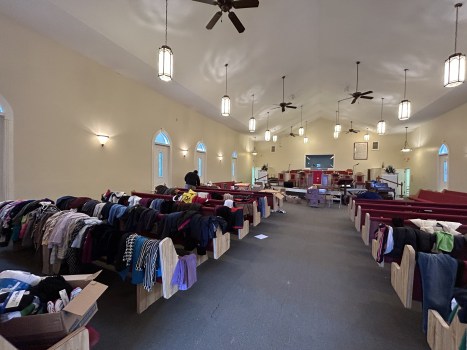 Trevor and Debbie Perry serve Letohatchee Baptist Church, where Trevor is pastor. He is also Disaster Relief Coordinator for the Montgomery Baptist Association, and he and Debbie are both certified disaster relief workers who respond immediately during a natural disaster.

“This Disaster relief [operation] was a joint effort of several people from various churches around the Montgomery Baptist Association,” Trevor said. “My wife and I are the only certified people for disaster relief in our church.”

The Montgomery team worked alongside teams from Chilton and Autauga Baptist Associations, Church of the Highlands in Montgomery, Auburn, and Birmingham as well as the Red Cross and River Region United Way assisting residents in 55 of the 60 Flatwood area homes with recovery tasks like tarping roofs, cutting trees out of yards from blocking driveways, and other basic damage mitigation efforts.

“We do this and there’s no charge,” Trevor said. “We like to have a chaplain with us that can talk to the homeowner and have prayer.”

Volunteers work to meet emotional and spiritual needs while delivering physical services, Trevor said. Some people may be dealing with sickness or grief on top of the natural disaster, and volunteers offer prayer and encouragement.

“We try to meet the needs of the people,” he said. “The reason we do it is not for our glory. When we look in the book of Matthew Jesus said, ‘Feed the hungry. Visit those in prison. When you do it for the least of these you do it to me.’ We’re doing this to serve the needs of the people at the same time we are serving Christ, to be the hands and feet of Jesus to those in need.”

Debbie, who is certified in disaster relief administration and operating chainsaws and heavy equipment, said relief efforts bring the extended faith family of relief workers and the community they serve together in service.

“The community came together and helped others,” Debbie said. “They were supporting each other too. We feel like we met some new friends.”

Flatwood resident Cynthia McKenney sustained damage to her car and the roof of her home. She said relief workers provided services she needed before repairs could begin, services she could not have accomplished on her own — cutting one tree off her home, removing another from her car, and praying with her and for her through the process.

“Without them I really don’t know where I would be right now,” McKenney said. “It was a very emotional time. I live by myself, so my mind was all over the place wondering what I was going to do. Sometimes you need someone to put out their hand and say, ‘I’m sorry. Everything is going to be okay.’ I have really been blessed by this.”

“I want to say thank you for the work the Southern Baptists came in and did,” Boyd said. “Not only did they do work, they formed a bond, a friendship with the people in the neighborhood. They actually talked with them, prayed with them, and encouraged them. It was a big help to the people to find out that they have people that really love them, regardless of what church they attend.”

The Gathering to bring Lowndes County together in love