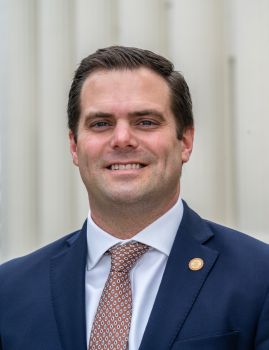 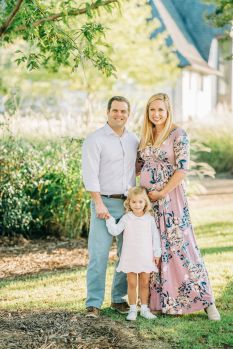 Hayneville native Drew Harrell lives in Montgomery now and visits Lowndes County often with wife Christian and daughter Elizabeth. The family will soon welcome the arrival of another daughter. Pictured are (left to right) Drew, Elizabeth, and Christian Harrell.

“Alabama has some major items to tackle, which will require a bold legislative agenda from my Administration over the next four years, and Drew is the right man to help me accomplish our goals,” Ivey said in a Nov. 17 press release. “I am proud to have Drew join our team as we work to ensure Alabama’s best days are yet to come.”

“Drew cares deeply for our state, is an incredibly hard worker and a great family man,” Ivey said. “We will certainly miss having William, but sure are proud of him as he brings his skills to his alma mater, and we are thrilled to be adding Drew to the Ivey Administration.”

Before the appointment, Harrell served as the Vice President of Governmental Affairs for the Business Council of Alabama, where he was a key figure in advancing good policy for Alabama, including the Rebuild Alabama Act.

“This is a tremendous opportunity and an honor,” Harrell said. “I do consider this one of my highest honors, to be able to be a part of a governor’s office, a governor who, in my opinion, over the years has done a great job representing the interests of all Alabamians.”

Harrell, a Hayneville native, graduated from Lowndes Academy in 2007 before earning his Bachelor of Arts from Huntingdon college and a Master of Business Administration from Auburn University.

“I don’t take this unique opportunity lightly,” Harrell said. “I’m honored to be referred to as a public servant. I take great pride in being from Lowndes County. That’s where I grew up and learned to work hard, so I’m proud to represent Lowndes County and Hayneville and to make them proud.”

In addition to expertise in policy and the political arena, Harrell is a former athlete who lettered in both baseball and football at Huntingdon College, where he serves now as vice president of the college’s National Alumni Board of Directors.

“Governor Ivey has a great team,” Harrell said. “Public service is a calling. Our goal is to work hard on behalf of Alabama citizens. Everyone on Governor Ivey’s team gets up thinking about that every day.”