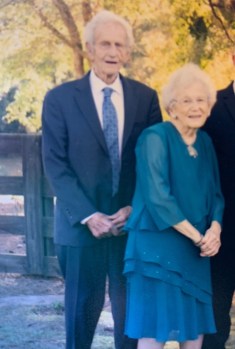 Caswell McCurdy married Jean McVay in 1953. The pair raised their two sons in Lowndesboro and were recognized for their work in the community by a town proclamation issued July 4, 2011.

Lowndesboro native Caswell McCurdy is a town fixture to many in the community.

The 92-year-old lives beside the two-story home on Broad Street where he grew up and continues serving his community and raising crops with his sons, Cas and Garrett, on the land his father and grandfather farmed.

“Mr. Caswell is the most dependable, hardworking, ‘do anything’ fellow in Lowndesboro,” said Mayor Anne Spooner. “He’s a sweet, dear man.”

McCurdy was born in 1930. Around age 13 he realized country folk needed milk. Not everyone owned a cow, he said, so he began selling milk to neighbors and eventually supplied milk to Hayneville High School where he attended.

“We didn’t have milk delivered then,” McCurdy said. “My father died when I was 15. I started selling milk because we had a cow. I ended up with six or seven cows and sold milk to the school, carrying 10 gallons every day.”

After high school, McCurdy attended Auburn University for a year before returning to his Lowndesboro home to farm the family’s land, situated just behind where Lowndes Academy sits today.

In 1953, McCurdy married Jean McVay from St. Stephens. The two moved to a post-World War II government-built home next door to the family home, and later raised their family in a new house built just behind the relocated structure.

McCurdy served in the U.S. Army for 18 months during the Korean War. In 1962, he founded the Lowndesboro Town Council and helped incorporate the town to service the needs of potable water to its residents.

“We wanted a water system here,” McCurdy said. “Our family was pretty lucky — we had plenty of water. We incorporated, formed a city council, and sold bonds for our water system.”

He still serves on the town council and is also Lowndesboro’s Mayor Pro Tem, acting as mayor whenever Spooner is unavailable.

“He is very active,” Spooner said. “He knows the water system backwards and forwards. He knows all the histories. He’s just a wealth of knowledge and it’s an honor to know him and to have him around.”

According to McCurdy, he ran for the Lowndes County Commission once and lost by 20 votes. Later, he was elected to the State Senate, winning by only two votes, but never served.

“They redid the state districts, so Frank Johnson took my seat,” McCurdy said.

The McCurdys worshiped together at St. Paul’s Episcopal Church, where Caswell is still active today.

The Town of Lowndesboro recognized the McCurdys and proclaimed July 4, 2011, a day of recognition for the pair’s accomplishments in the community.

Jean passed away six months ago, and McCurdy still lives in the home the two shared during their 68 years together.

“Mrs. Jean’s death has been hard for him,” Spooner explained. “They were the sweetest couple in the whole world, always doing their part.”

He said he still enjoys farming and plans to continue as long as he is able.

Lowndesboro churches cross denominational lines to love their community together