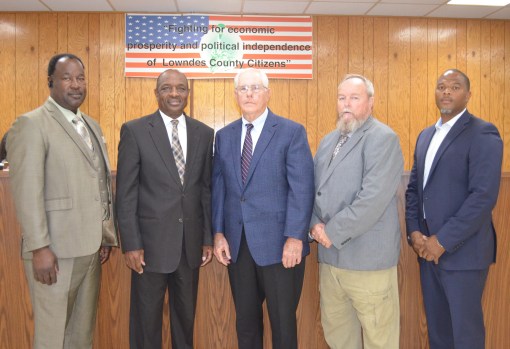 The Lowndes County met on Nov. 16 and voted on officers for the next term, re-electing Charlie King, Jr. as chairman and electing Dickson Farrior as Vice Chairman. Pictured are (left to right) Robert Harris, King, Farrior, Joseph Barganier, and Joshua Simmons. 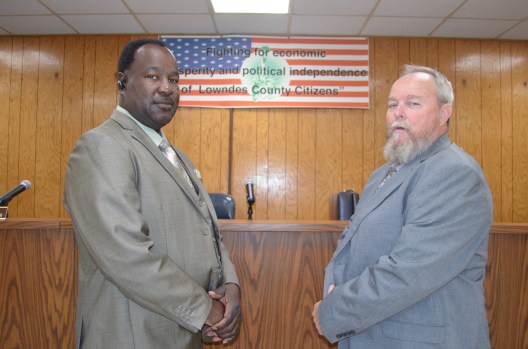 The Lowndes County Commission held its first meeting after elections on Nov. 16, swearing in re-elected commissioners Robert Harris for District 2 and Joseph Barganier for District 4.

The commission elected officers for the new term. District 1 representative Charlie King, Jr. was re-elected chairman and Dickson Farrior from District 5 was elected as vice-chairman.

After elections, King asked the commission to vote to go into an executive session to discuss good name and character. During the closed-door session, commissioners considered a proposal to terminate County Attorney Ashley Smith’s contract and seek a replacement.

No motion was made during the executive session, but before the public meeting adjourned, commissioners voted 3-2 in favor of terminating Smith’s contract with 30 days’ notice.

“I feel like we need better representation than what we’ve been getting,” Farrior said. “I have nothing against Mrs. Smith. I think she’s tried, but she didn’t have the experience. We need somebody with more experience that can open doors for us.

“We had Hank Sanders, who was a good representation for the county. He could get in doors a lot of people couldn’t. He got a lot of things for Lowndes County. We’ve got a library. We’ve got roads. He did that.”

Commissioners Harris and Joshua Simmons, who voted against the motion, expressed concerns over the decision.

“There was no explanation given on why [Smith’s contract was terminated],” Simmons said. “On every legal issue we’ve asked her to get information on, she’s done it. We’re going backwards because there’s no clear path forward. Where are we going as far as growth and new business coming in. It was the same under the past administration, Chairman McAlpine, Dickson Farrior, and Joe Barganier. No new growth.”

Harris said he felt those who supported the decision were not forward thinking.

“There’s no reasonable justification for this decision. Every law issue that comes up, she pulls that law up on her computer and explains it to them. So, she’s not saying what they want to hear.”

Smith said she was unaware of the commission’s intent to discuss her contract until the day of the meeting, and declined to comment on the matter.

In other business, the commission: