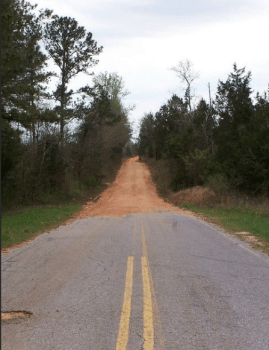 Since 2019, Lowndes County residents have received gradual road improvements, thanks to funding through the Rebuild Alabama Annual Grant Program.

“We buy materials and use our equipment to resurface some roads that haven’t gotten any attention in a long time,” Butts said.

At a Nov. 16 County Commission meeting, Commissioner Robert Harris requested the status of road improvements and expressed concerns over the number of dirt roads the county maintains.

Harris also requested Butts apprise the commission on how many public dirt roads exist within the county and said he hopes to eventually see them all paved.

“Back some years ago, I created subdivision regulations for Lowndes County,” Harris explained. “I also initiated a policy so that we would not accept any more dirt roads. That was simple economics because we don’t have the money to continue maintaining them.

“In Montgomery County, when a subdivision is built, that road has already been designed, paved, and curbed before the first house is built. So, why should we settle for less in Lowndes County? We have to have a stopping point somewhere with the dirt roads.”

Prior to these regulations, citizens of subdivisions built on dirt roads could request the county accept the road for public maintenance. Now, the commission accepts only paved roads, and those must be built to a certain standard for acceptance.

“We have a standard for how wide the road should be and how much the base should be,” Butts said. “It’s a minimum standard of what can be put on the road.”

Butts said his office has plans to begin an inventory of all public and private roads within the county this winter. The County’s overall goal is to pave all public dirt roads, but with over 300 miles of unpaved roads in existence, that goal will take years to achieve.

Harris said his inquiries at the commission meeting were intended to gauge and ensure the county does not continue to accept dirt roads for maintenance.

“We want to make sure we are doing what we’re supposed to do,” Harris said. “I have asked for a list of every dirt road we have now. We have residents who want their roads paved, but we can’t because of the money we spend maintaining those dirt roads.”

Getting acquainted with Lowndes County