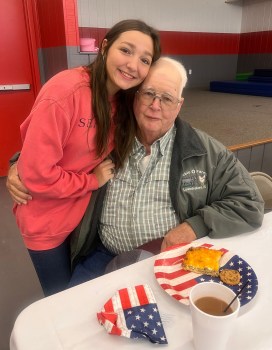 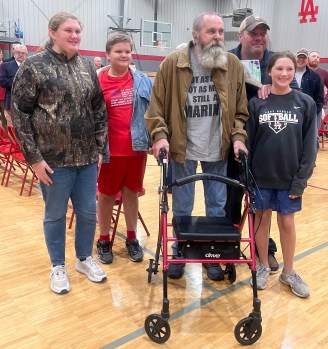 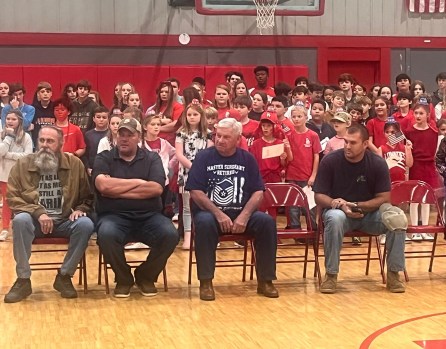 Lowndes Academy students dressed in red and stood to honor veterans recognized at the Veterans Day Celebration on Nov. 11. 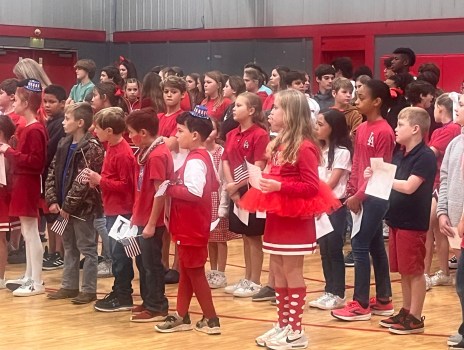 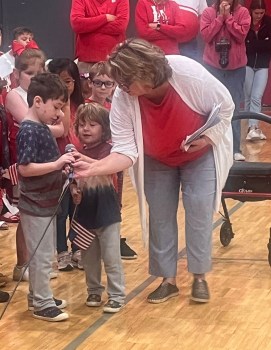 Veterans Day Celebration organizer Susan Mohun assisted students as the recognized attending veterans and remembered those who have died. Pictured are (left to right) Dalton Sowders, Thomas Sowders, and Mohun.

The event, originally slated as an outside gathering around the flagpole, was held in the gymnasium due to a drizzling rain and featured the Pledge of Allegiance, National Anthem, a devotion, veteran recognition, and breakfast.

Susan Mohun began coordinating the event four years ago when her husband, Barry, took on the role of headmaster. The celebration is a tradition that began many years ago, she said.

“When my husband became headmaster here, I realized we went to school on Veterans Day,” Mohun explained. “Someone said, ‘It’s because we used to have a [recognition] program, but we haven’t done it in a while.’ Well, I decided to bring it back.”

A few weeks prior to the event, school administrators send out forms requesting information from families who have military members. The school also seeks out veterans within the community and invites them as guests of the program.

“Some veterans are parents or grandparents of our kids,” said Mohun. “Others are community members. It is so important, especially to our younger students, to recognize their military family members and those who have passed away.”

According to Mohun, the event enhances student’s learning about history and inspires questions like, “What were those people fighting for?” and “Why were they in the Army or Navy?”

“The celebration opens up a lot of conversation for students’ families and teachers who can explain that things weren’t always the way they are now,” Mohun reflected. “We’ve been at war and we’ve been having to secure our freedoms. I think it opens up a lot of great conversations rather than just taking the day off and [students] not realizing why.”

Army veteran, Nolly Oglesby, served during the Vietnam war and carries some hard memories of his time there. Oglesby said he remembers that military members haven’t always been appreciated.

“When we came back from Vietnam, we didn’t get a warm reception,” Oglesby recalled. “Celebrations like this make us feel better about what we did. This makes us feel more appreciated. I enjoy this.”

“The students I know are proud of the last generation,” he explained. “So, maybe they’ll do everything they can to make the next generation better.”

Robert Jolly credits his time in the military with helping him become the man he is today.

“It’s good that we can be here and hopefully be a good role model for these kids,” said Jolly. “The current generation isn’t joining [the military] and they don’t see the pride and patriotism and the pride in the country that we did. That’s troubling to me. I hope the next generation sees our success and views the military as a pathway to success.”