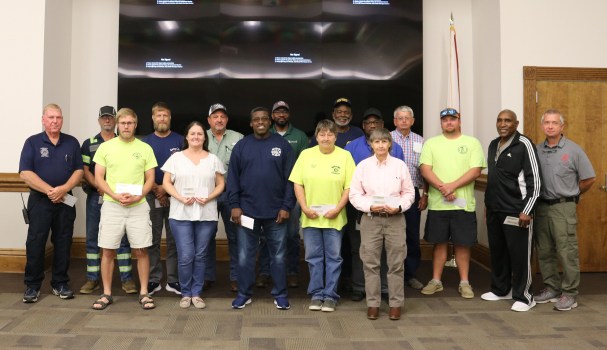 Pioneer Electric Cooperative, Inc. recently announced the award of $500 grants to 27 volunteer fire departments serving Butler, Dallas, Lowndes, and Wilcox counties, all thanks to the donations of cooperative members through the utility’s Operation Round Up Charitable Foundation.

“We share a common goal of serving our communities and protecting their safety,” said Pioneer Electric General Manager Terry Moseley. “The safety of our employees and the general public is our top concern. We hope that the grants and training assist these departments in accomplishing that shared mission.”

According to Collirene volunteer and Lowndes Fire Association President, Rodney Rudolph, all Lowndes fire departments are run by volunteers. Local departments receive some county funding, he said, but tax dollars are insufficient to cover costs and donations like these are vital for continuing operations.

“With the tax base for Lowndes County, money is limited for each department,” Rudolph said. “The bulk of the money comes from fundraisers and donations.”

Rising fuel costs add to the expenses of volunteer departments, Rudolph noted, and donations help to purchase equipment, fuel, and training for volunteers.

Operation Round Up is funded by cooperative members who elect to “round up” their monthly electric bill to the nearest dollar. All funds stay within Pioneer’s service community to benefit local organizations and individuals in need.

With charitable giving down in recent years, volunteer services have struggled to stay afloat, Rudolph pointed out. Most departments need donations and would welcome volunteers, too.

“Volunteer services are down across the state and the country,” Rudolph explained. “We know not everybody can be a volunteer fireman, but they can help with donations and fundraisers. They can come out and participate when we have a barbecue or other fundraiser and help fund their local department.”