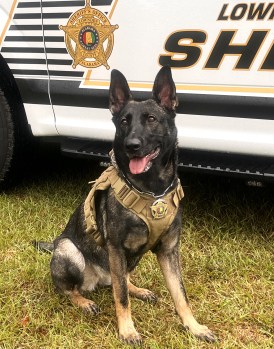 The 2 ½ year old German Shepherd, Agi, joined the Lowndes County Sheriff’s department in August as the first four-legged badge-wearing deputy in over a decade. 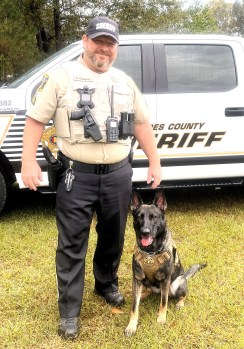 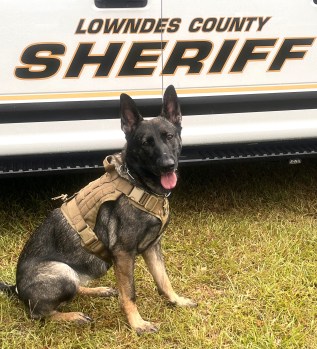 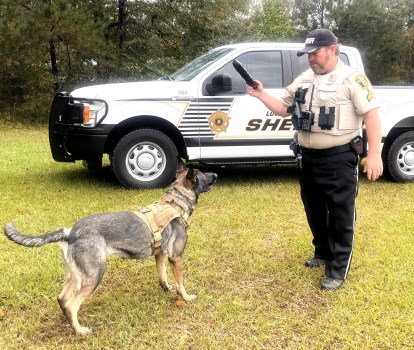 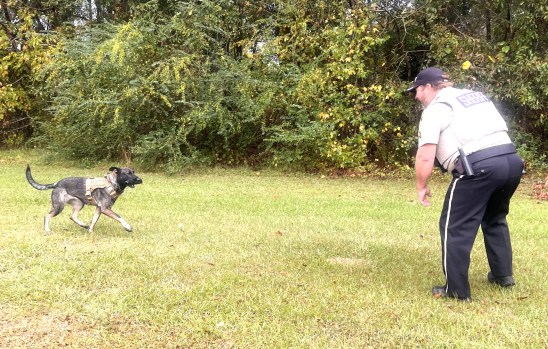 Agi and her handler, Corporal Michael Speigner, trained for five weeks together before assuming K-9 officer duties with the Lowndes County Sheriff’s department. 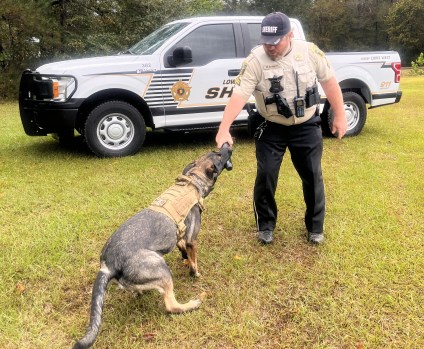 K-9 deputy, Agi, is all business while on duty, but loves to play fetch with her handler, Corporal Michael Speigner, and his family.

Agi, the Lowndes County Sheriff’s first K-9 deputy in over a decade, will soon enjoy the same protection as other deputies on the force all thanks to the generous donation of a ballistic canine vest from Vested Interest in K-9s out of East Taunton, Massachusetts.

Vested Interest is a non-profit whose mission is to provide bullet and stab-protective vests to dogs of law enforcement and related agencies. The vests can cost up to $2,300, so to protect their newest deputy, the department applied for and won a grant for the ballistic armor, which is currently en route to Alabama.

The department welcomed the 2 ½ year old German Shepherd, Agi, as a certified deputy just after she completed law enforcement training. Agi joined her handler, Corporal Michael Speigner, in August as a badge-wearing K-9 member of the department.

Agi is trained in tracking and narcotics detection. The dog accompanies Speigner on nightly patrols, and the pair serve on calls to perform drug searches and tracking missing persons.

Since August, Speigner and Agi haven’t needed to track anyone, but they have conducted two high school drug searches and visited several local schools for meet-and-greet opportunities with students.

“[Agi’s] been great, not only in what she’s trained at, but also in community service,” said Sergeant Nick Cognasi. “She shows [the community] that there’s different aspects to law enforcement in Lowndes County that haven’t been there for a long time.”

While Agi may be new to the force, her story was actually years in the making.

Sheriff Christopher West was appointed as Sheriff following the tragic death of “Big John” Williams in December 2019. West assumed the office with an extensive narcotics investigation background and recognized the impact drugs add to gang violence and neighborhood deterioration.

Shortly after becoming Sheriff, West floated plans for a K-9 unit, which could serve as a tool for the department’s newly-implemented drug enforcement program. The department searched for reputable law enforcement canine breeders and with possible costs ranging well over $15,000, they also sought programs to help with funding.

The Hometown Foundation, Inc. in Cheshire, Connecticut, donates fully equipped police K-9s and training to local and state departments across America. The Lowndes department applied for the program and was accepted in December 2020.

Deputies flew up to consider options and drove back with Agi in January 2021.

“We had options of using a Malinois or a German Shepherd,” recalled Cognasi. “But we chose Agi because we wanted to make sure that this dog had a good enough temperament to be around people.”

After arriving in Alabama, Agi trained at Alabama Canine in Tuscaloosa. Speigner joined her there for five weeks of training before the two were ready to begin duties together.

Speigner, a life-long pet enthusiast, enjoys working with Agi, who he welcomed into his home as part of the family. The dog is very personable, he said, and makes friends everywhere they go.

“Her best buddy is our cat,” Speigner chuckled. “She loves to be around people. She always wants to play, but she is a deputy who deserves respect.”

West said Agi has been perfect for re-introducing K-9 officers to the community.

“We talked about acquiring a dog that did bite work but decided that wasn’t really a route we wanted to go, especially in introducing our county to canines,” West explained. “In our introduction [to K-9 officers] we felt we would be better served by introducing a dog that was community friendly, a dog that the children could get to know and learn what she was all about.”