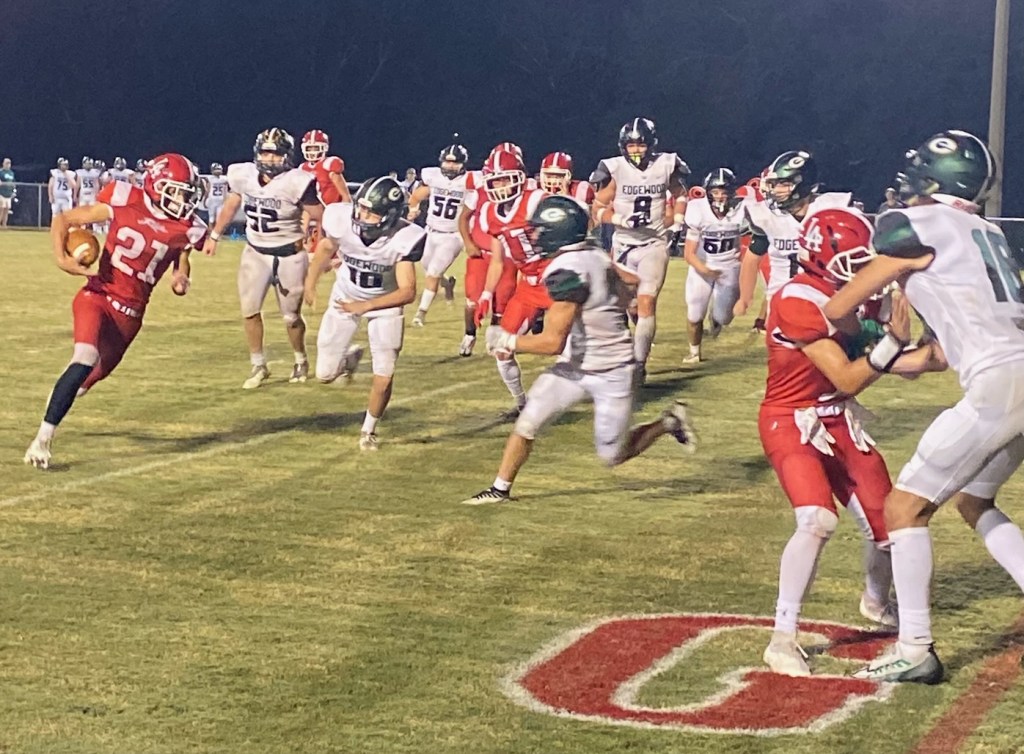 Lowndes Academy’s Scott Stinson scores on a 5-yard run for the Rebels in a 34-7 victory over Edgewood Academy on Friday night. (Photo by David Lovell / The Lowndes Signal)

Lowndes Academy cruised to a 34-7 victory over Edgewood Academy at Memorial Stadium on Friday night.

The win marked the first time in 22 years the Rebels bested the Wildcats on the gridiron. Lowndes Academy’s previous triumph over Edgewood occurred Sept. 1, 2000, a 51-0 victory for the Rebels at home.

“Our boys, we don’t think we played the greatest, but we found a way to win. We fought hard, and our defense was outstanding, once again. They’re the backbone of our team.”

A 65-yard kick return by Luke Lovell and a 49-yard touchdown run by Cooper Dansby gave the Rebels a 14-0 lead after the opening quarter.

Lovell added his second touchdown with a 12-yard run in the second period to put his team ahead 21-0.

Edgewood scored its lone touchdown of the contest on a 65-yard punt return by Undrez Crawford.

The Rebels added two touchdowns after the intermission via a 6-yard run by Kasen Dismukes and a 5-yard run by Scott Stinson to extend their lead to 34-7.

Dansby led the Rebels with 84 yards on four carries, while Dismukes contributed 80 yards on 12 rushing attempts.

Moye said while the win was big, there were areas where his team could improve moving forward.

“We’ve got to improve on lining up right, coming out of the huddle, and being able to be a team,” Moye said. “We’ve got a lot of people trying to make big plays without just doing their jobs, trusting each other, and making sure we do our job, our keys, and let the rest work itself out.”

Lowndes Academy (3-1) will travel to face Class 2A Abbeville Christian (2-2) on Friday night at 7.

“This is our first game that we’ve got to travel a long way, our first really long road game, so that’s going to be a challenge in itself,” Moye said. “Other than that, we feel like we’ve got a good gameplan. The kids are practicing hard and working hard. We like our chances to be able to go down there, and if we do well, we’ll be able to take care of business.”