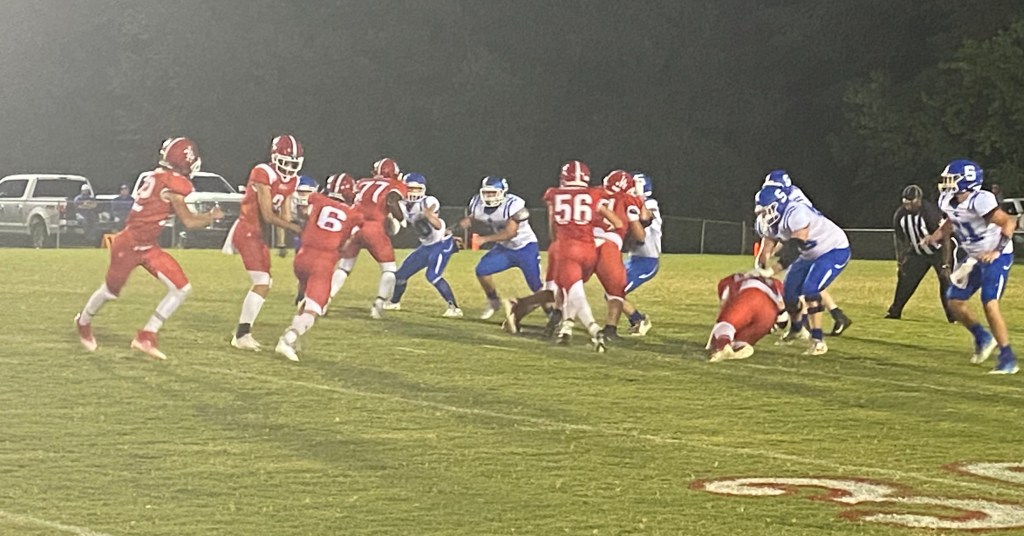 Lowndes Academy quarterback Clayton Hussey showcased his skills as a dual-threat, scoring a pair of touchdowns through the air and on the ground in the Rebels’ 42-18 win over Southern Academy on Friday night.

Hussey completed his night with a 4-of-11 effort through the air for 100 yards, two touchdowns, and an interception, and added 91 yards on seven carries with two touchdowns. Defensively, he recorded six tackles, with one for a loss.

“Clayton played really well,” said Shane Moye, Lowndes Academy head coach. “He did a great job leading the offense. The offensive line played really well and blocked really well. Defensively, we were just outstanding, being able to control them (and hold them) to under 100 yards rushing, knowing that’s what they like to do, is pretty impressive.”

His first touchdown of the game came in the first quarter on a 49-yard pass to Luke Lovell to put his team up 7-0.

Southern responded with a 29-yard touchdown pass from Campbell Webb to Gabe Harvey to cut Lowndes’ lead to 7-6.

Noah Smith put the team ahead for good with an 11-yard run to give Lowndes an 15-6 advantage.

In the second quarter, Hussey found the end zone twice on runs of 48 and 7 yards, respectively.

Hussey’s final touchdown, a 34-yard pass to Cooper Dansby, occurred between a pair of Cougar touchdowns.

The Cougars scoring plays took place in the third quarter on special teams, one on a 49-yard punt return by Webb and another via a 65-yard kick return by Harvey.

“Special teams gave us the hardest problems,” Moye said. “We’re trying to work on that, and hopefully, we’ll get that better for the rest of the season.”

Lowndes will host Edgewood on Friday night at 7.

“They do a lot of stuff offensively with motion and changing formations a lot,” Moye said. “We’re up to the task because Lowndes hasn’t beaten Edgewood since 2000, so about 22 years. We’ve been focusing on that all week, trying to do something our school hasn’t done in a long time. Our kids seem focused, and we’ll see what happens.”