Sweetgum Apiaries has expanded to include around 30 large colonies of honeybees. Photo by Christy Johnson 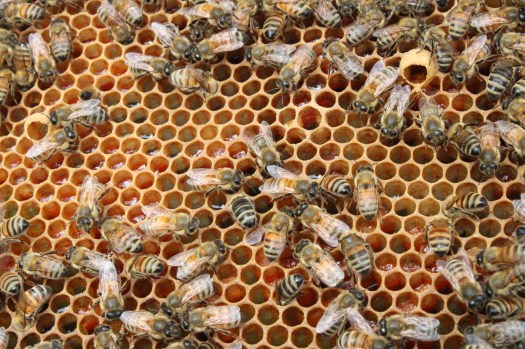 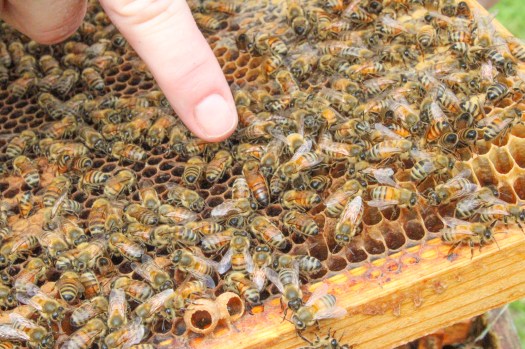 Kate Pugh points out the new colony's queen before combining the bees together. Photo by Christy Johnson 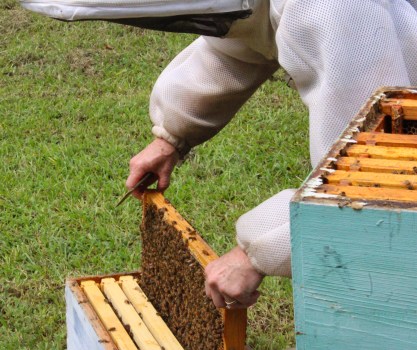 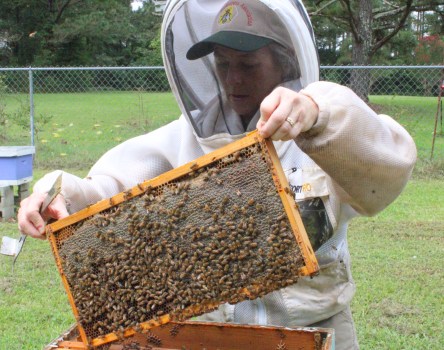 Kate Pugh demonstrates how to combine two hives together. Photo by Christy Johnson 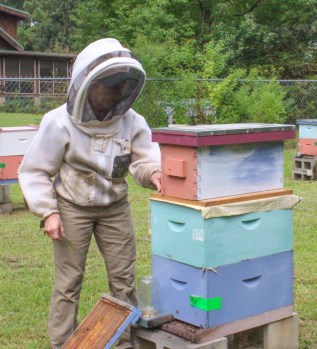 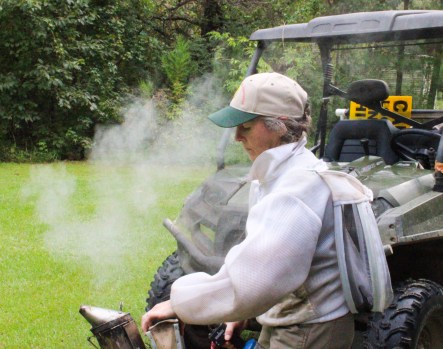 Kate Pugh and her husband, Ralph, started Sweetgum Ridge Apiaries, a bee farm located in Lowndesboro, and have been honing their craft at beekeeping and producing local honey for eight years.

She said the couple decided to start the endeavor after they noticed the bees near their home.

“They kept swarming out to the trees every year and my husband (Ralph), we were getting close to retirement, said, ‘You want to do some bees,’” Pugh said. “I was like, ‘OK.’”

Pugh said she didn’t know anything about it but was willing to give it a try.

The couple’s bee farm has grown to include two locations on their property, one for smaller hives and another for larger, more established hives.

The bees’ honey is harvested and sold as well as the bees themselves through their home-based business, Sweetgum Ridge Apiaries.

“We sell bees to new beekeepers and people who are re-establishing hives that they have lost or just want new genetics into their bee yard,” Pugh said.

Pugh and her husband both worked in the medical field prior to retirement.

“I was a (cardiac) nurse, and my husband was a nurse anesthetist,” Pugh said. “He used to put heart patients to sleep.”

Pugh and her husband did not meet through working together at a hospital, however.

“We were stationed together over in Desert Storm,” Pugh said. “Our tents were next to each other. It was very romantic.”.

Pugh said her husband is an Alabama native, while she was from Massachusetts. The couple moved to Lowndes County in 1995 after being stationed in Virginia.

“It was a bit of a culture shock for me,” she said.

Pugh provided a tour of her operation, starting with the small hives called nucleus hives.

A “little hive” can consist of approximately 20,000 bees. Pugh explained that all bees in the U.S. are European honeybees and are not native to America. The bees are a combination of several types of strains.

“To get a pure strain is almost impossible nowadays unless you do artificial insemination,” she said.

The duo have feeding buckets of sugar water set out for the bees since nectar is not abundant right now.

Pugh continued the tour with the 30 or so large colonies the couple maintains. The colonies can contain as many as 80,000 bees in mid-summer. In the winter, the numbers decrease to 20,000-30,000.

“This is where we started everything. Then we just expanded down that way ,” Pugh said as she pointed to the smaller hives.

Pugh said the change of the seasons is an important part of beekeeping. During the winter, they do not produce honey and will stay in the smaller two- to three-level structures. In February, the queen starts laying eggs and building up the colony for the season. Around April, honey supers will be added on top for the bees to store their honey.

“That’s when you see the big, tall stacks of hives,” she explained.

The honey is pulled off in July and can produce around 115 gallons, Pugh said.

The honey is produced from nectar collected by the bees from sources in the area such as blueberry and blackberry flowers, clover, and wildflowers.

The extraction and bottling operation have expanded from the couple’s kitchen to a large storage building dedicated to production. Large production equipment includes a centrifuge for spinning the honey out of the comb and a bottling tank to heat the honey and easily dispense it into containers used during production.

The couple produces raw honey they sell from their home,at trade shows, and at events. A few of the items they produce are comb honey, creamed honey, and cinnamon honey. The creamed honey is a smooth, whipped honey that is available in strawberry, peach, elderberry, and blackberry.

Sweetgum Ridge Apiaries can be reached at (334) 799-3158, by email at Longbowkp08@gmail.com, and online at www.buysweetgumridgehoney.com.