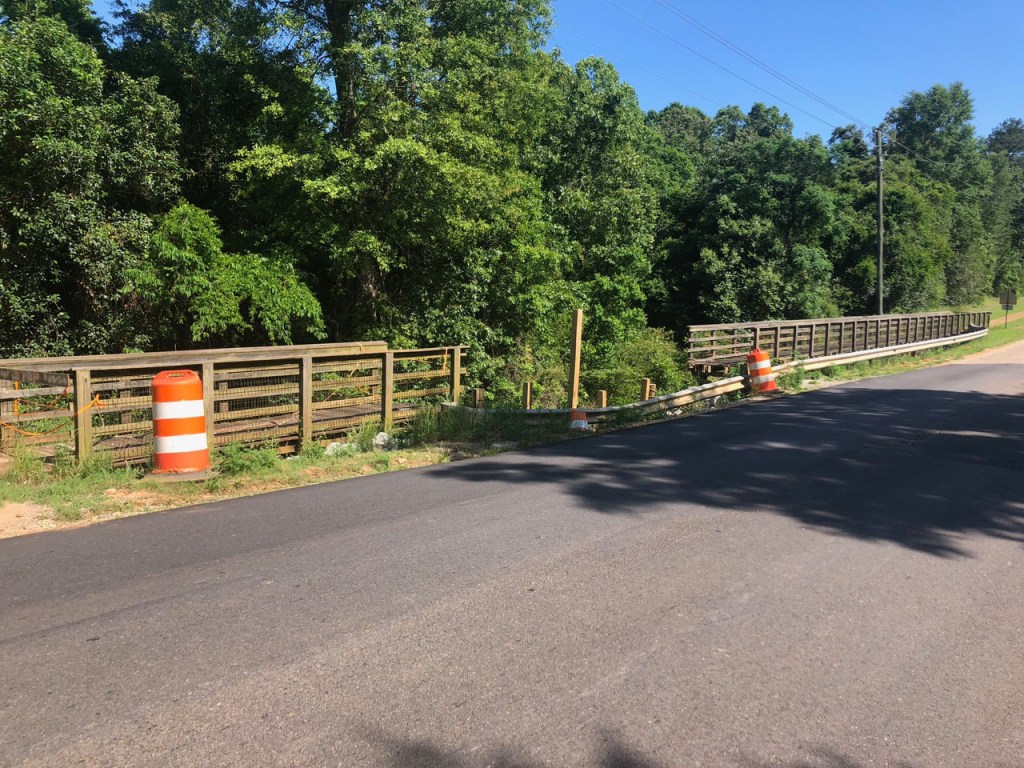 Spooner opened by first saying she had planned to have a serious discussion about the conditions of the road, but she instead thanked them for recently working on the eroding street that completely washed out during a rainstorm in October.

“I want to thank you for extending the culvert,” she said. “That helped. We’ve done some work, too, to help with drainage around the serious point on the road, but there’s a little bit more to do.”

Spooner said part of the work remaining includes putting up a guardrail so the town can begin construction to fix the damage to the town’s walking bridge that runs alongside the northbound lane of the road.

“It’s quite a safety issue for us,” she said. “Kids from the school and people out walking have to walk down County Road 29 … At the county’s request, we haven’t rebuilt the bridge until the road is fixed so that it would make it easier for you. We’re waiting to do that.”

Spooner also expressed concern about people having to walk on the road to get past the broken bridge as some of the logging trucks, gravel trucks, and other vehicles travel down the road at speeds beyond the posted speed limit.

To improve safety, Spooner asked the county to restripe and repave the road, and requested a timeline for when the requested fixes could be completed.

District 1 Commissioner Robert Harris noted he had discussions with town councilman Jerry Ingram regarding the county’s manpower issues and logistical reasons why the construction hasn’t been completed.

“We acknowledge all the concerns that you have, and we’ve done everything as fast as we can with the people that we have, the equipment that we have and also the monies that we have as well,” he said. “We try to do it as fast as we can, but also, on the resurfacing project, that’s a federal aid road. That road, as I spoke a couple years ago, will be following the County Road 32 project, which is about to take place.”

Harris said the earliest resurfacing can be done on the road would be the later part of 2023, but with five districts in need of the federal grant money, the commission has to distribute those funds on a rotational basis.

“There’s not enough money that is funded down per year to do each district, so sometimes, we have to let it overlap a lap, so instead of it taking five years to rotate to a federal aid road, sometimes it may be even six or seven years,” he said. “The funding is only $500,000 that we get from the federal aid, so we have to try to combine that because that road could probably, truly be projected to be around $900,000, maybe up to a million, depending on how the company bills it.”

Harris suggested Spooner and the council submit applications for grants and federal aid to help fund the project so it can speed up the timeline.

For the guardrail portion of Spooner’s request, Harris said the holdup in getting the guardrails back in place is there’s only one company in the state that bids out the railing.

“That timeline is theirs, and we really have no control over that timeline …” he said. “We have some railings throughout the county where it’s been two or three years, and we still haven’t gotten it done.”

Harris said he understands Spooner’s urgency and her desire to get the project completed, but the delays are a countywide issue that is beyond the county’s control.

“What I’m saying is that we have these problems throughout the whole county and each district,” he said. “We do things as fast as we can with what we have, so as fast as we can – if we can get the funding in faster, we can do that. If we can get the contractors out to do that, we can do that, too. All we do is put in the orders to get it done, and use the money we have available to get it done.”