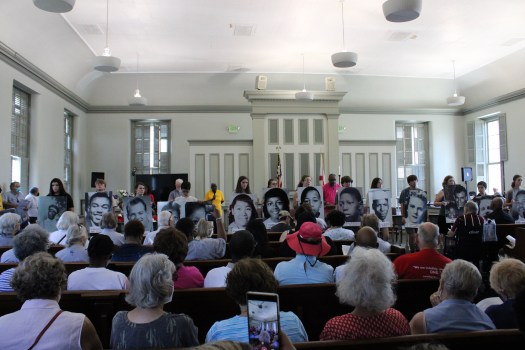 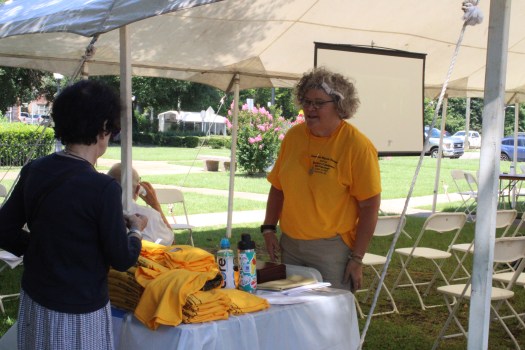 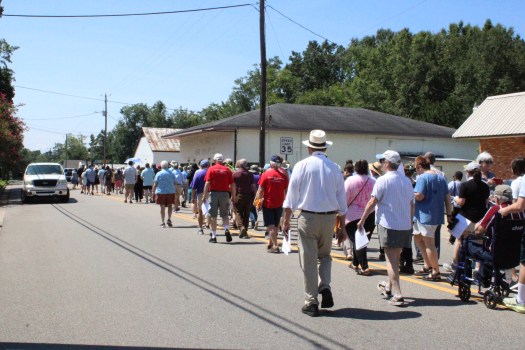 For the past 25 years, the Episcopal Diocese has held a pilgrimage in Jonathan Myrick Daniels’ memory. Daniels’ story is one of conviction and determination that Rev. Glenda Curry, Ph.D, said she believes needs to be told.

The 12th Bishop of the Episcopal Diocese of Alabama, Curry said she was grateful that during the pandemic, everyone continued the pilgrimage online and added meeting in person again feels like a reunion.

A reunion of more than 200 people joined together, some as far away as Texas, to pay tribute to Daniels and other known Alabama martyrs of the Civil Rights Movement.

At this year’s event, Curry spoke to the masses gathered following the pilgrimage on the importance of remembering those who were killed and why.

“Coming here today and walking that path together, and remembering the events of that day is critical,” She said. “We can’t learn enough about what happened and we can’t take it in enough. Because every time we do, we heal.”

In 1965, Daniels was a student at the Episcopal Theological School in Cambridge, Massachusetts. He watched the appeal of Dr. Martin Luther King in March of that year, asking for religious leaders and citizens to come to Selma to help secure the right to vote for Blacks people.

Daniels heeded the call and traveled to Selma, where he participated in peaceful protests and provided support to the black community.

At a picket line in Fort Deposit on Aug. 14, 1965, Daniels and others were arrested and taken to Hayneville’s jail. He would spend six days in horrible conditions. On Aug. 20, he and his companions were unexpectedly released.

Hot, scared, and thirsty, Daniels and four others walked the short distance to Cash’s store. At the same time, Ruby Sales, a 16 year-old Black girl, was climbing the steps to enter the store. A man appeared cursing at the teenager and pointed a shotgun at her. Daniels grabbed Sales, shielding her from the gun. Daniels was shot with a 12-gauge shotgun, and died on the steps of Cash’s store.

The pilgrimage begins each year at the Hayneville Courthouse. The hundreds who gather walk to the jail where Daniels was held,then continue to the site of the former Varner’s Cash Store where Daniels was murdered. The procession returns to the courthouse.

The program concludes with the reading of the 16 Alabama martyrs who died during civil unrest during the Civil Rights Movement. The martyrs are a mix of Black and white, adults and children. Poster-size photographs of each face are marched through the sea of people, before being placed at the front of the courtroom. A somber hymn accompanies the procession of the dead, “Soon I Will Be Done,” sung by Rev. Fannie David of Oak Street A.M.E. Zion Church in Montgomery.

The Alabama Martyrs honored are as follows: