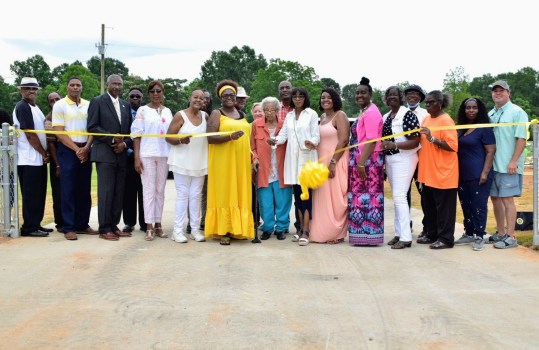 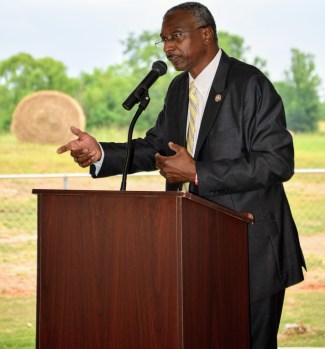 Nivory Gordon, Jr., director of Rural Development for the State of Alabama, speaks on the projects his agency has worked on in Lowndes County. Photo by David Lovell/ The Lowndes Signal 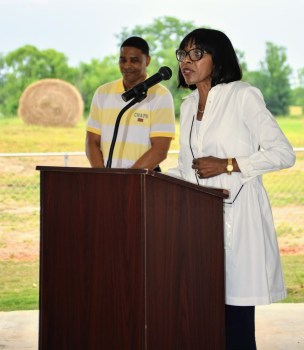 Convenient exercise and outdoor recreation for Gordonville residents is now a reality as the town’s park officially opened its gates last month. The park is equipped with an open-air pavilion for events, exercise equipment to maintain a healthy lifestyle, and playground equipment for children.

“It has been very important to myself as mayor, the town council, and the community that we continue to move forward with growth and opportunity for this city,” Mayor Orbuty Ozier said. “Every community has the right to a better quality of life, and it has not taken long for hard work to pay off.”

After the town of Gordonville purchased land for future development, Ozier and the town council began the work of applying for a community development block grant to secure funding for the park. While waiting for this grant, they worked to raise funds from individual donors and organizations and conducted other fundraising efforts. The block grant has not been issued to date, but that has not stopped the project from moving forward.

One fundraising event that was organized was a car and bike show held on the grounds where the park is now located. This event featured cars and motorcycles entered by locals and those in surrounding areas and was held in conjunction with an Independence Day celebration in July 2019. First, second, and third-place trophies were awarded as fees were collected to enter a vehicle. Vendors were also on hand to sell everything from clothing and jewelry to hotdogs and ribs, according to a past article in The Lowndes Signal.

“I take my hat off to my council members. We are a team and we work together to make a difference for the people of this community.  I would not trade my council for anything. They are aggressive and energetic,” Ozier said.

Many community leaders were on hand to celebrate the grand opening of the city park including Nivory Gordon, Jr., the director of Rural Development for the State of Alabama.

“We have sewer projects in all of these zones,” Gordon told the crowd. “We stand proudly to say that we have invested millions and millions of dollars in Lowndes County.”

The grand opening for the park comes on the heels of the unveiling of the cornerstone for Gordonville’s municipal complex, built in 2019 shortly after the first acre of land was acquired by the town of Gordonville.

Prior to building the municipal complex, business was conducted in a doublewide trailer that had become a safety hazard. After that facility was closed, Wood Chapel Christian Church allowed the town of Gordonville to have its council meeting in its annex facility until the municipal complex was completed.

As Ozier and the town council work hard to bring growth and opportunity to Gordonville, they invite you to visit the new park with your family. The hours for the spring and summer are 7:30 a.m. to 8 p.m. In the fall the hours will change to 7 a.m. to 6 p.m., and for the winter months the hours will be 8 a.m. to 5 p.m. If you are interested in renting the pavilion inside the park, please contact the town of Gordonville at 334-563-7730.