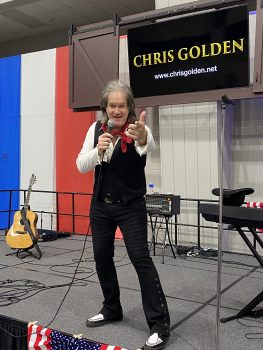 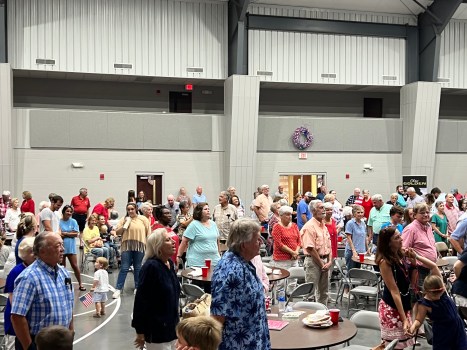 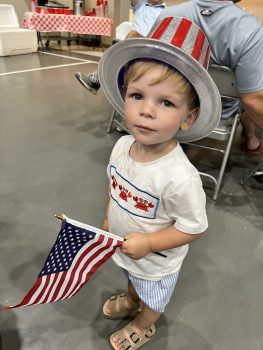 Rowdy Burkett displays his pride in America during the Hayneville Baptist Church celebration. Rowdy is the son of Corey and Sara Burkett. Photo Submitted

“Every year we have a July 4th celebration at Hayneville Baptist and it’s our largest outreach to the community that we have during the year,” Event Chairman Bradfield Evans said. “We are able to present the Gospel, feed everyone, and have good entertainment, but at the end of the day it’s about outreach.”

A quick show of hands during the event revealed that about half of those in attendance were not members of Hayneville Baptist Church.

“Seeing people within Lowndes County that we don’t know come to this event, that we are able to feed, entertain and ultimately witness to, that’s the point of the event. Our mission with this celebration is to present the Gospel and reach hearts that haven’t been reached,” Evans said.

Chris Golden is no stranger to the stage as he has toured and played the Southern Gospel circuit since he was 15 years old. His longest stop was with the Oak Ridge Boys where he played with the band from 1995 through 2011. Chris is the son of Brewton native and Oak Ridge Boy, William Lee Golden. Chris also records and performs with his father and family as part of the group, William Lee Golden and The Goldens. The group recently made their Grand Ole Opry debut as a band featuring three generations of country artists.

Plans are being made to have Chris Golden perform at next year’s celebration since he was well received by those in attendance.

“We have not ultimately made that decision with him but everyone hopes we can have him again next year,” Evans said. “If all goes well, we will have him back next year.”

In addition to the musical entertainment, the church provided dinner for attendees. Barbecue, side dishes, sweet tea, and plenty of deserts were served as part of the evening activities.

“I would like to thank Tommy and Connie Love for being our chefs for the evening and cooking thirty Boston butts by themselves,’’ Evans said. “They did a phenomenal job.”

After Chris Golden finished playing, a love offering was collected, and the Gospel was presented. Then guests headed outdoors where the children’s parade and fireworks show was held.

“We had about a twenty minute fireworks display,” Evans said. “Dustin Casey, our local fire chief and church member, was in charge of putting that together and he and his team shot the fireworks. We go all out on the fireworks as it seems to draw a big crowd and it was certainly not a disappointment,” Evans said.

If you would like more information on Hayneville Baptist Church, you can visit them online at https://haynevillebaptist.com/ or on Facebook at https://www.facebook.com/ HaynevilleBaptistChurch.