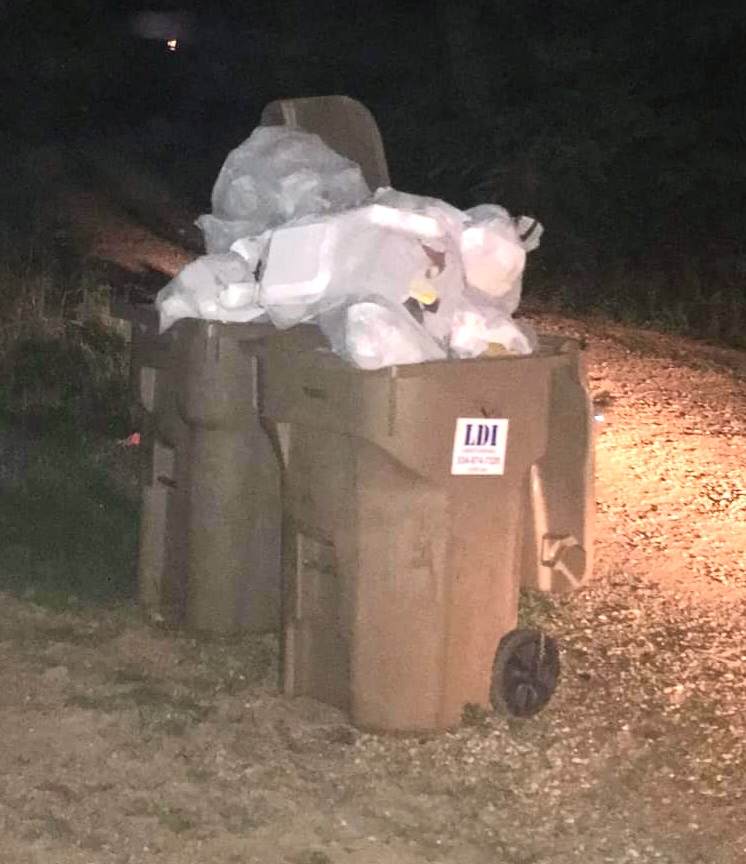 Lowndes County residents received a surprise in their garbage bill this quarter. An email was sent out to customer’s on Liberty Disposal notifying customers of an immediate rate increase of $20, making the quarterly billing $93 for trash service.

Several residents have made complaints about the rate increase, not because they are against it, but because they cannot seem to get Liberty to pick up their trash at all.

Angie Wheeler lives on Mims Road and said her trash has not been picked up for two weeks straight. The cans are currently overflowing with trash.

“We haven’t had a good experience with the trash people,” Wheeler said. “Twice in May they haven’t picked up the trash. Currently my sister’s and my trash cans are over-flowing because they didn’t pick up last week. Wednesday is our normal pick up day, so if they don’t pick up then that will be two weeks in a row and three weeks total of no trash pick-up.”

That is just in the month of May.

“I could understand the increase, but why should I pay when the job isn’t even being done to begin with,” Wheeler stated.

There are approximately 15 to 20 families living on Mims Road. Residents of the road have made complaints to Liberty and to the county commission.

Wheeler said when she speaks to Liberty they tell her they will get it or tell her the rad she lives on is to muddy. The county school bus and residents have no issues traveling the dirt road during rainy weather.

“There’s no excuse for the last few times they missed it because it hasn’t been raining and this is a decent dirt road,” she said.

Sheila Mims lives on County Road 37 said Liberty picks up when they want.

“They usually pick up on Wednesday,” Mims said, “but like the week before last, they picked up on Tuesday evening I was told. They missed our garbage and on that Friday I called them to come back out and pick up. They came out that next Tuesday before the regular day on Wednesday and picked it up. My can was running over.”

“The price now is unreal! I could see maybe going up $10 per person, but $20? They are going to have to give me consistent service for $93,” Mims said.

Molly Headley has had different issue with Liberty Disposal. She lives on Enfinger Road and said the drivers have damaged property.

“There was a switch in drivers and in November the driver took out the gate to my neighbor’s fence and crushed it,” Headley said. “Then drove off and didn’t say a word. My trash can started getting thrown in the road and on top of our fire hydrant which ended up busting our trash can and we could no longer hold trash in it due to wildlife dragging it off.”

Headley said it is impossible to get anyone on the phone at Liberty to have her concerns addressed.

“Our trash is supposed to be picked up on Mondays and one afternoon my neighbor was sitting outside and the trash truck hit her fence again and she approached the driver about the situation and I told her about my trash can. The company sent someone out to look at her fence the next day and then the next week I got a new trash can. Then no one came all together for about a six-week period to collect trash. They still hadn’t sent someone at the time to repair my neighbors fence and weren’t returning any phone calls. Once they started picking up trash again we had to start leaving our cans at the road because it was never the same day or time,” Headley said.

The rate increase was approved by the county commission during last month’s regular meeting.

Dixon Farrior, Lowndes County Commission, said they were aware of the complaints by customers.

“I have spoken with Liberty regarding the poor service and lock of service in certain areas and we are working with them to try and improve the situation,” Farrior said.

Farrior explained that there has not been a rate increase with trash collection since 2015 that he is aware of.

“Liberty came to us and told us that they are hurting financially. Diesel fuel has went up, everything has increased in price,” Farrior said. “They came to us several months back and we have been debating it and putting it off. We were afraid that if we didn’t commit to the increase then they would pull out and leave us at the end of the contract and we wouldn’t have any garbage service. That would not be a good thing.

Farrior said he wasn’t sure what the county would do if Liberty pulled out of the county. When bids were opened previously, Liberty was the only company to show interest in the Lowndes area.

Many of the residents are not upset about the increase as much as the lack of notice given to the customers.

“They have had trouble getting drivers,” Farrior said. “Once they get one trained on the truck, he goes somewhere else.”

Liberty Disposal is under contract with the county until July, Farrior said.