Businesses could be affected by intersection changes 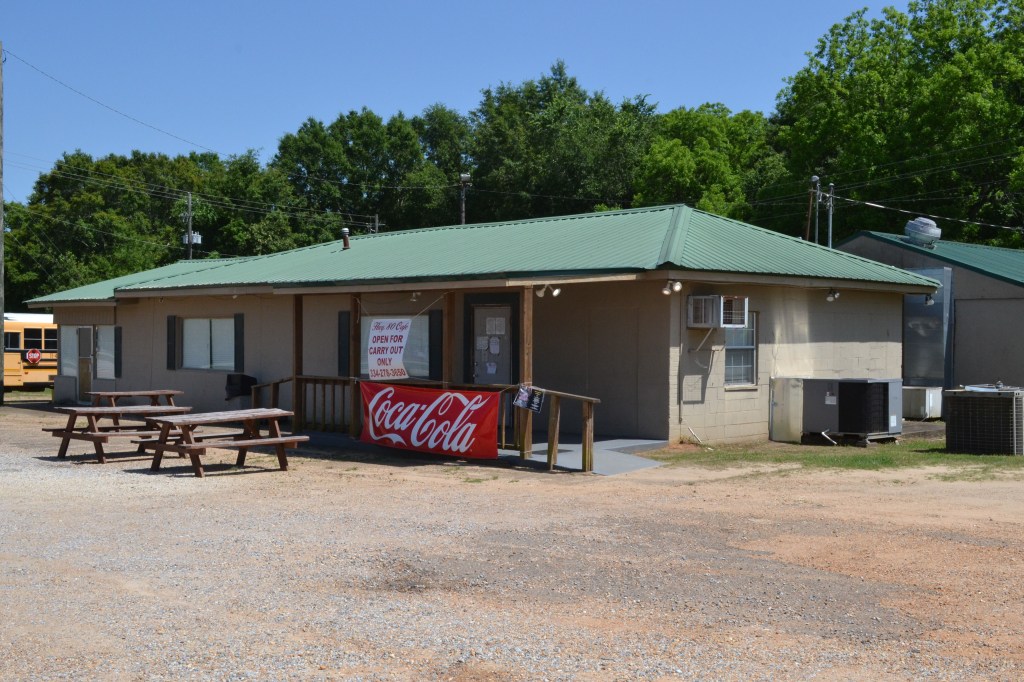 Hwy 80 Café: Hwy 80 Café, owned by Chequita Johnson, sits alongside a service road near the intersection of U.S. Highway 80 and Alabama Highway 97. Photo by Shane Dunaway

Residents hoping for a traffic light as the solution at the intersection of U.S. Highway 80 and Alabama Highway 97 may have to temper their expectations.

Chequita Johnson, owner of Hwy 80 Café, said the last accident she remembers seeing in the intersection occurred a month ago and added she observes people driving dangerously at that intersection nearly every day the restaurant is open when she takes food out to customers.

“I just suggest, it’s my own personal opinion, that there needs to be a traffic light there to try to slow some of this traffic down,” she said. “Now what the state is recommending, rerouting the traffic, that’s not going to do anything but cause more accidents to happen because people can’t see over the hill.”

She added the proposed plan, which other residents and public officials have said could potentially close one end of the service road that runs near her restaurant, would adversely impact all the businesses whose customers utilize the service road.

“It’s going to hurt all three businesses on the service road,” Johnson said. “When I say hurt it, I mean hurt it deeply. I pray that this proposed plan that they’re speculating or wanting to do does not take place. What needs to happen is they need to put a light there like they did at Mitchell Young Road, which is maybe 15 miles away from the café, to slow some of the traffic down.”

Johnson, who also works as a school bus driver, said people who use the intersection should maintain awareness of their surroundings in order to prevent accidents from occurring.

Alabama Department of Transportation Media & Community Relations Bureau Chief Tony Harris said for an intersection to qualify for a traffic light, a traffic study must be done and it must meet criteria outlined in the Manual on Uniform Control Devices, a federally established guideline for determining whether or not a traffic signal can be installed.

“I’m not saying the criteria you look at (for) every intersection is going to be the same, but in order to install a signal, it must be warranted based on that prescriptive process,” Harris said.

According to the manual, the study shall include “an analysis of factors related to the existing operation and safety at the study location and the potential to improve these conditions, and the applicable factors contained in the following traffic signal warrants.”

Harris said he was unaware if a traffic study had been done at that intersection, but he suspects officials at the regional level have had it done.

“If this engineering study does not conclude that a traffic signal is warranted at that location, it’s very unlikely that the department is going to install one because you have applied a set of federally-prescribed criteria to guide your analysis,” Harris said. “That process will yield a proper way to signal for traffic. It’s unlikely that there would be deviation from what the study concludes.”

The proposed construction plan by ALDOT, estimated to cost $2 million, implements the usage of J-turns, which are essentially U-turns, a practice Harris said was adopted from other regions.

“Alabama is beginning to apply some methods that other states have used for years, some of them are indirect lefts, J-turns, stuff of that nature that are more common in a lot of places than they are here,” he said.

The changes being proposed for the intersection are to improve safety for those crossing and turning onto Hwy. 80.

Lowndes County Sheriff Christopher West offered his thoughts on what makes the intersection problematic and dangerous.

“I think one of the major issues is the lane confusion right there,” he said. “There’s several lanes, then there’s a service road that’s a part of that intersection as well. I think it’s just confusing, especially for older drivers.”

West said he attended the public meeting on April 21 and had mixed emotions about ALDOT’s proposed plan.

“I think that they put some good effort into it, but I also feel like – I don’t know, it could be better,” he said. “I was hoping they’d maybe come up with something a little bit better. I don’t know the answer to it because I’m certainly not an engineer. All I’ve ever been is a cop, but I can definitely see where it (their proposal) may help reduce some accidents …

Lowndes County Probate Judge LaShandra Myrick said she didn’t have an opinion regarding the proposed plan.

“I’ll acclimate to whatever they (ALDOT) implement there,” she said. “That’s not my area of expertise, so I don’t know one way or another … If I’m a cake baker, and you don’t bake cakes, then you can’t tell me how to bake a cake.”

Selma resident Martin Chance said he has driven an intersection that uses J-turns in Faunsdale and described the effort as the most ill-conceived construction that has ever been done.

“You’d almost have to see it to see how crazy it is,” he said. “Nobody likes it.”

He said while he doesn’t think a traffic light would fix the issue, the proposed plan by ALDOT would hinder traffic.

“I just can’t see how making a U-turn on 80 makes any sense because you’re slowly pulling out into fast traffic,” Chance said.