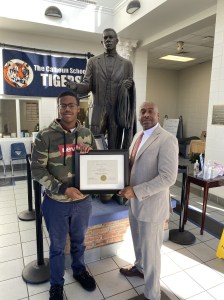 In mid-December, the Lowndes County Board of Education presented several awards to a few Calhoun School students and personnel.

LaDarrien McCall received the award for Student of the Quarter.

McCall is a junior at Calhoun school and is described as an outstanding student by faculty. McCall manages to maintain his status on the honor roll while performing as a leader in JROTC.

McCall is the highest scoring student on the ACT according to the assistant principal. He is also a Tiger Elite and served as an attendant on the 2021 Homecoming Court.

Outside of school, McCall attends the New Hope Christian Church where he sings in the youth choir and serves as usher board. He also volunteers to perform custodial duties at the church.

After graduation, McCall plans to attend Georgia Tech and obtain a degree in engineering. 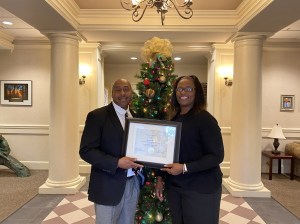 Dr. Kimberly Jordan-Ray received the award for Volunteer of the Quarter.

Ray is a physical therapist who specializes in pain management, therapeutic massage, strengthening, as well as several other areas.

Administration at the school feel Ray serves as a role model for students by actively mentoring those who are eager to venture into healthcare after graduation. 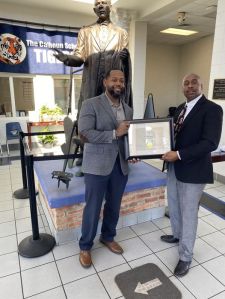 Nicholas Townsend receives the Principal of the Quarter Award

Mr. Nicholas Townsend, principal at The Calhoun School, received the award for Principal of the Quarter.

Townsend shows his love for the school on a daily basis, going above and beyond according to administration.