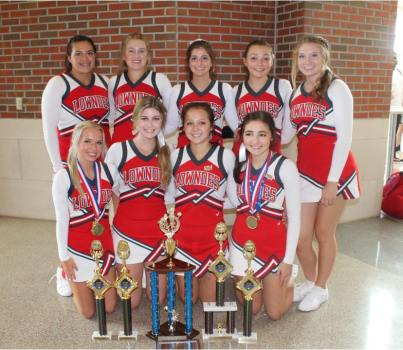 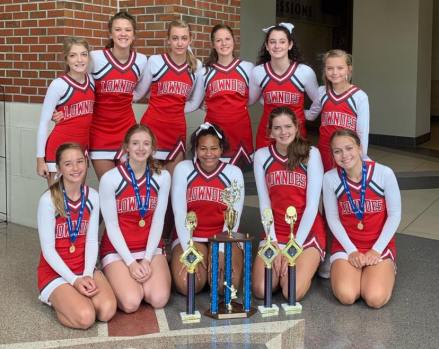 The Lowndes Academy junior varsity and varsity cheerleading squads brought home more than their pom-poms from the AISA cheer camp this past week.

“The girls have worked extremely hard over this past month,” Kristen Harrell, cheer coach, said. “They were determined to win and they did just that. Both teams were up against strong competition in their divisions and we knew that we’d have to bring our best. These girls did exactly that and managed to come out on top.”

The varsity rebels cheered their way to first place in the cheer category, sideline category and was named Games Day champions & state champions.

The junior varsity squad was not going to be outdone by the varsity. The junior Rebels brought home first place in cheer, camp routine, Game Day champions and state champion awards.

Riley Johnson, Katie Lockhart, and Haylon Self were named All-American.

UCA voted varsity and junior varsity to receive the Traditions of Excellence award.

“The achievement I’m most proud of is the Traditions Award both teams won. This is voted on by the UCA staff and goes to the school that they feel exemplifies the best leadership qualities and takes true pride in their school,” Harrell said. This is a testament to the great job the parents of these young girls are doing to raising them and also to our faculty and administration at Lowndes for teaching them to have pride in their school and their program.”

Congratulations on all your accomplishments.