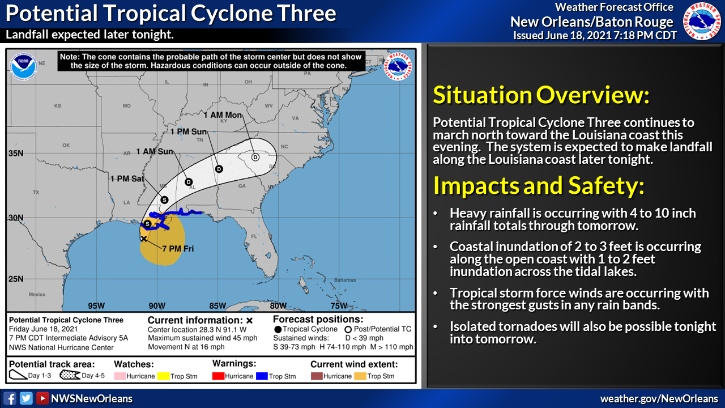 Hazardous Weather Outlook Marion-Lamar-Fayette-Winston-Walker-Blount-Etowah-Calhoun-Cherokee- Cleburne-Pickens-Tuscaloosa-Jefferson-Shelby-St. Clair-Talladega- Clay-Randolph-Sumter-Greene-Hale-Perry-Bibb-Chilton-Coosa-Tallapoosa- Chambers-Marengo-Dallas-Autauga-Lowndes-Elmore-Montgomery-Macon- Bullock-Lee-Russell-Pike-Barbour- 409 AM CDT Sat Jun 19 2021 This Hazardous Weather Outlook is for the counties served by the National Weather Service office in Birmingham. There is a risk of localized flooding along and south of I-20 as a tropical system moves across the region. There is also a low risk for tornadoes from late this morning through the evening hours associated with an inland tropical system. The threat area is south of I-20. There is a low risk for localized flooding along and south of I-20 on Sunday as the remnants of a tropical system moves out of the area.