Annual Jonathan Daniels Pilgrimage to be online due to COVID-19 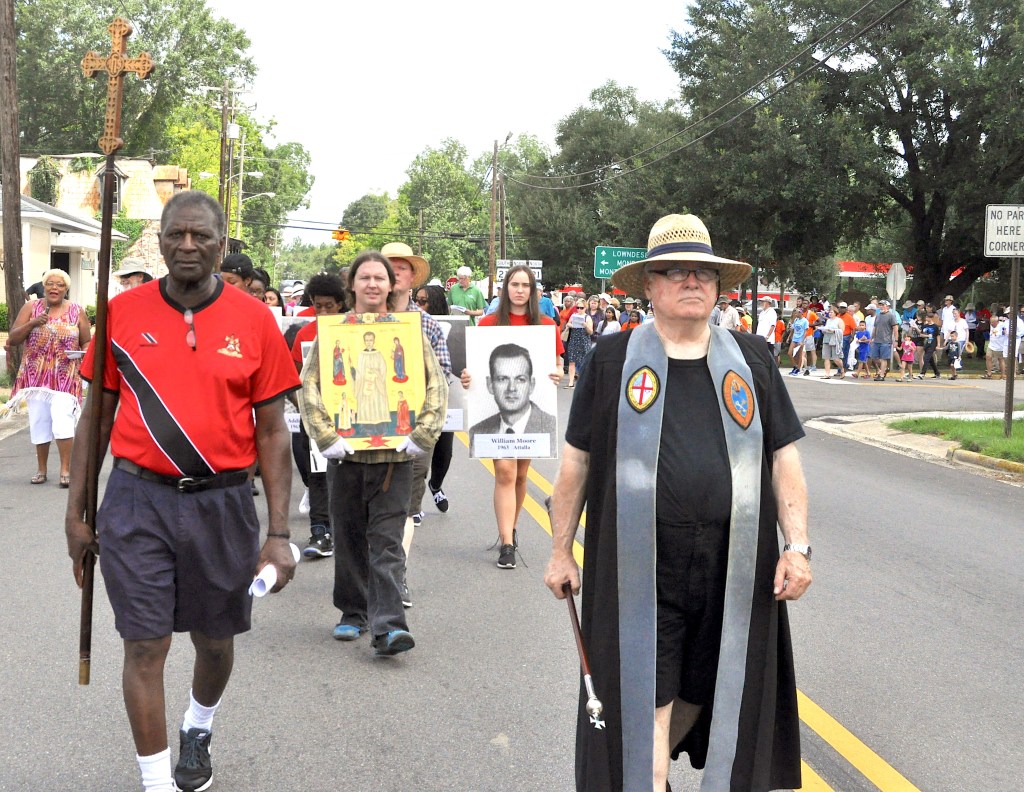 Pilgrims proceed toward the old Lowndes County Jail in Hayneville and the Cash Store in the 21st annual Jonathan Myrick Daniels Pilgrimage and Procession.

For 21 years the Episcopal Diocese of Alabama has co-sponsored with the Diocese of the Central Gulf Coast, an annual pilgrimage to Hayneville, Alabama, to commemorate the life and work of Jonathan Myrick Daniels, a martyr of the Episcopal Church, along with other martyrs of the civil rights movement.

Thousands have attended the pilgrimage over the years, to march together  to the jail where he and others were imprisoned, to the site where he was killed, and then to a worship service in the very courtroom where his killer was acquitted by an all-white, all-male jury for the charge of manslaughter.

This year’s pilgrimage on Saturday, August 15, at 11 a.m., will mark the first time it will be held online.  This event is not only a momentous time in this country’s history for discussions about race but also an opportunity to spread widely this story to those who are unable to physically participate and to those who have yet to hear the account of this remarkable man and others killed during the civil rights movement. The virtual pilgrimage will include archive video footage of the 2015 pilgrimage, as well as contemporary remarks from the Episcopal bishops in the state of Alabama, community members, representatives of Virginia Military Institute, and others.

The keynote speaker will be the Very Rev. Dr. Kelly Brown Douglas. She is the Dean of the Episcopal Divinity School at Union Theological Seminary and the Bill and Judith Moyers Chair in Theology at Union. She also serves as the Canon Theologian at the Washington National Cathedral and Theologian in Residence at Trinity Church Wall Street. She is widely published in national and international journals; and has authored several books, including The Black Christ (1994, 25th Anniversary edition 2019), Sexuality and the Black Church: A Womanist Perspective (1999), and Stand Your Ground: Black Bodies and the Justice of God (2015).

This virtual event will be streamed on the Diocese of Alabama website and social media. To learn how to view the broadcast, visit www.dioala.org/JonathanDaniels.

Jonathan Myrick Daniels was an Episcopal seminarian killed while working in the civil rights movement in Hayneville, Alabama. In 1965, in answer to Martin Luther King, Jr.’s appeal, Daniels came to Selma. He returned to seminary to secure permission to return to Selma to continue work sponsored by the Episcopal Society for Cultural and Racial Unity (ESCRU). He was one of a group of protestors arrested on August 14. The group was held in the jail in Hayneville for 6 days, and then unexpectedly released. Daniels walked to a nearby store with a small group. The group was confronted by Tom Coleman, an auxiliary deputy, wielding a shotgun. When Coleman pointed the shot gun at 17-year old Ruby Sales, Daniels pushed Sales out of the way. He was killed instantly by the shot. Richard Morrisroe, a Roman Catholic priest, was shot in the back as he and the others tried to get away. Coleman was acquitted by an all-white jury.