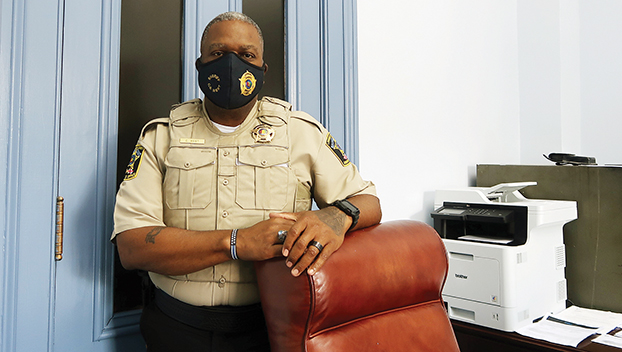 Lowndes County Sheriff Christopher West is taking numerous approaches to build the trust between the community and law enforcement.

After being sworn in as sheriff, West reached out to the community to make sure their needs were being met.

“A lot of citizens talked about their concern that they hadn’t seen a lot of patrol in the areas in which they were needed,” West said last week. “But one of the issues that we ran into was that some of our townships don’t have 24-hour law enforcement.”

The Sheriff’s Office filled in for neighboring cities such as White Hall and Mosses, but it came to a point where they didn’t have deputies in the areas they were supposed to.

“We began hiring more deputies that were all younger guys that hadn’t been through the Academy,” West said. “Our approach was to mold them into the type of law enforcement officer that would be best to serve Lowndes County.”

West’s approach included sending deputies to cities to learn more about the communities and to connect with residents. He wanted to hire officers that engage with the people they’re serving.

“We wanted to see if they were going out and engaging with the community,” West said. “If there is a situation that comes about that is extremely stressful, the community will know that this is an officer they can communicate with.”

However, due to the COVID-19 pandemic, training new officers came to a short standstill.

“In the early weeks at one of the academies, a few of our guys tested positive,” West said. “It’s just become one of those things. COVID is out there, but so is crime.”

West was appointed Sheriff in December 2019 and had big shoes to fill after the shooting death of Sheriff John “Big John” Williams. He assures he has been welcomed in his new position with open arms and open minds.

“When compared to John Williams, it’s like trying to come and speak after Martin Luther King Jr.,” West said. “The crowd’s still clapping for him, and then you try to come on stage. You can’t hold a candle to that.”

Sheriff West’s focus right now is to create an inclusive environment where the community knows they can trust and engage with law enforcement.