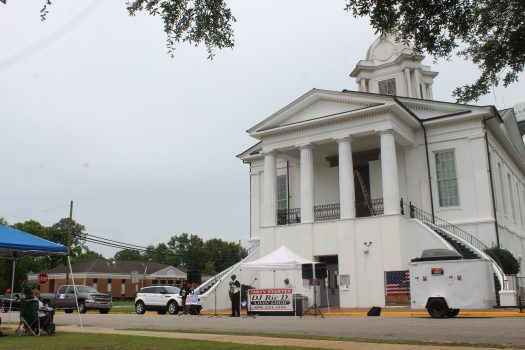 A multi-faceted Juneteenth celebration and Black Lives Matter rally was held at the Lowndes County Courthouse Square in Hayneville on Saturday.

The gathering functioned as a time remembrance for George Floyd, whose death at the hands of a Minneapolis police officer in May sparked country and worldwide protests, and slain Lowndes County Sheriff “Big John” Williams, who was killed in November 2019.

There was also a voter registration table set up during the rally and the theme was “Equal Opportunity, Liberty and Justice for All.” There were also several vendors on hand.

The event was kicked off with a motorcade that circled around the square before a series of speakers delivered their messages.

Reverend C.L. Mitchell served as the host, introducing each speaker and giving his own thoughts throughout.

He spoke of the legacies of both Sheriff Williams and George Floyd.

“When [Sheriff Williams] died, a little of us died also. But I would like to say he left a legacy, a legacy of love. He loved his family, Hayneville, Lowndes County, the state of Alabama and our nation,” Daniels began.

“It’s sorrowful that [George Floyd] had to become famous in his death, but that death brought people to a summit that has created a movement. We have a new generation of young people saying enough is enough,” Daniels said.

Following Daniels, Trinity U. Johnson spoke, who gave the history behind Juneteenth.

“On June 19, 1865, Union General Gordon Granger…gathered with federal troops in Texas to announce the Civil War had ended and slaves had been freed… Juneteenth began a state holiday in Texas in 1980 and a number of other states followed suit,” Johnson explained.

President Abraham Lincoln’s Emancipation Proclamation had taken effect two-and-a-half years earlier so, with the end of the Civil War, Granger’s order was essentially the final official step in the freeing of enslaved black people in America and the dissolution of the structures that held it in place.

Next, a Barbara Williams performed the song “I Won’t Complain” by Rev. Paul Jones.

The next speaker was Rev. Kenneth Glasgow, who spoke on a variety of topics including Williams.

“Big John was teaching his officers something that I wish all officers across this country knew, which was to respect the person and forget about the crime for a minute. Being a first responder… they can be the first mentor [someone] has in the redemption and restoration of their lives. On the way in the car, even though the job has to be done of taking you to jail, you had a man that understood that you were a man, that talked to you, who understood you were going through something. For [Williams] to be taken down by violence should really be alarming to us,” Glasgow said.

“It has been so acceptable for us not to accept justice that I’m very glad to see what’s been going on across this country now. [There are] blacks and whites and Hispanics and Asians and everybody coming together and realizing it isn’t about color anymore, it’s all about classism… All of us need to see justice in a way that it cannot be racialized, classified, or based on status or division, but what it is- justice,” he continued.

“The Lowndes County Improvement Association’s goal is to improve life for people living here mentally, physically, spiritually, economically and spiritually. We most certainly invite everyone to get involved. Some issues we’re concerned about include getting a hospital here,” Dr. Hubert began.

“We’re proud to have a few companies interested in making [a hospital] a reality. You can’t make a decision based on the total population. We have the opportunity with a hospital to own our own ambulance service, our own dialysis center, a medical specialty clinic,” he continued.

“Lowndes County has problems with diabetes and hypertension and their complications… If you have a heart attack or stroke, we only have one ambulance for the county. And if that ambulance is in service, guess what? You’re in trouble,” Dr. Hubert said.