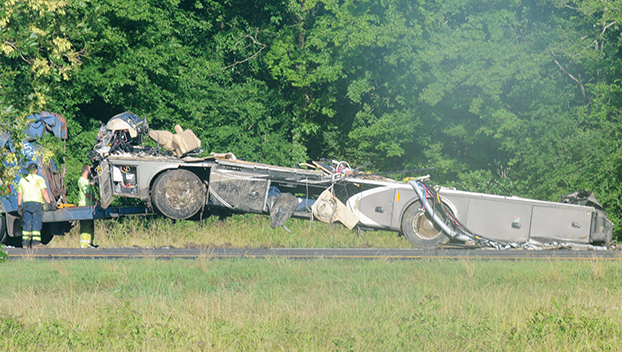 A single vehicle crash claimed the lives of a Montgomery couple last Wednesday on Interstate 65 near Lowndes County. | Photo by Mark Rogers

Last Wednesday, a single vehicle crash near the Lowndes-Montgomery County line on Interstate 65 claimed the lives of a Montgomery couple and backed up traffic for miles in Lowndes County.

Leland C. Courson, 63, was killed when the 2017 Tiffin motorhome he was driving went off the roadway and overturned. Courson was pronounced dead at the scene, as was his wife, Stephanie B. Courson, 61.

The Pintlala Volunteer Fire Department responded initially to the call and contacted several others to assist. The PVFD took to social media to thank Montgomery Fire/Rescue and Haynes Ambulance noting, “the operation was a complex extrication.”

The operation and cleanup took more than four hours and included multiple agencies. Interstate 65 traffic northbound was diverted until nearly
7 p.m. and crews had both lanes shut down to remove the debris. Traffic was diverted off Exit 158 in Lowndes County and routed through Pintlala and back on to the interstate.

The crash occurred near Gravel Hill Road around 4 p.m. and claimed the life of Steven Yancey Campbell, 31, of Greenville. Campbell was killed when the 2001 Kawasaki motorcycle he was operating collided with a 2008 Chevrolet Impala driven by Markell Harris of Greenville. Campbell was transported to the Regional Medical Center of Central Alabama where he was pronounced dead. Troopers said speed is believed to be a factor in the crash.

Troopers with the Alabama Law Enforcement Agency investigated 375 traffic crashes with five fatalities, as well as 10 boat crashes and four non-boating fatalities (drownings) during this year’s official Memorial Day holiday travel period, which was from 12:01 a.m. Friday, May 22, to midnight Monday, May 25.

This past Memorial Day traffic crashes involved three drivers, one passenger and one motorcyclist. The deadly crashes occurred in Autauga, Hale, Lee and Mobile counties. The motorcyclist was using a helmet at the time of the crash, however, three of the four individuals killed while traveling in vehicles equipped with seat belts were not buckled in. Monday, May 25, was the only zero-traffic fatality day of the four-day weekend.

Although the holiday travel period has concluded, ALEA Troopers will continue to patrol Alabama roadways and waterways throughout the summer and conduct DUI checkpoints and other enforcement activities designed to curb crashes, injuries and fatalities. Troopers will also participate in this year’s Click It or Ticket, a National Highway Safety Administration campaign promoting seat-belt usage.

This year’s Click It or Ticket was postponed due to the coronavirus pandemic and will begin Monday, June 15, and end Sunday, June 28. Everyone is reminded to use seat belts no matter how short the trip, as well as to use personal flotation devices (PFDs) while on the water.