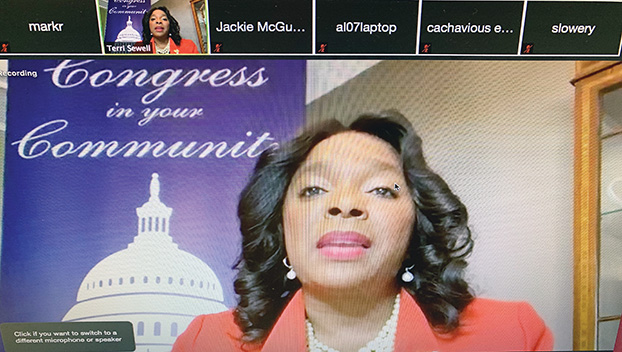 Congresswoman Terri Sewell updated constituents Tuesday about efforts to ease restrictions and begin to open Alabama up as the COVID-19 pandemic continues.

Meanwhile, Lowndes County recorded its first death from the virus and as of Wednesday morning had 55 cases confirmed of COVID-19 out of 172 tests.

“As you know, the governor asked each of the seven congressional members to put together a task force to advise her on the best way to open up the economy in Alabama,” Sewell said. “I was very blessed to have about 50 members from my district representing about 18 different categories — everything from large manufacturing to small manufacturing to retail and restaurants and healthcare professionals to advise us on the best way to open Alabama’s economy.”

Sewell staid the idea was to open Alabama strategically and responsibly.

“Today (Tuesday), the governor did announce that she was slowly opening government,” Sewell said. “I thought that was great. We advised in our report that we should do so phased in — gradually — taking into account people’s lives, the nature of the business as well as its exposure to the public. I thought that her ‘Safer at Home’ order was an attempt to do that. I think it’s going to be really important in the days ahead that we continue to practice social distancing and rigorous sanitation. She recommended facial coverings and I would strongly suggest to my constituents that while they are in public they should wear face masks and practice social distancing.”

Prioritizing vulnerable communities is important, according to Sewell.

“When you think about the people who are diagnosed from the disease, a disproportional amount of them are African-Americans,” she said. “Our report said the most responsible thing for government to do was to prioritize the testing, tracing and treatment in vulnerable communities. I was reassured by Dr. (Scott) Harris’ emphasis also on the ability to continue to track the number of cases and hospitalizations as slowly we open our economy. We need to be able to insure that we are able to snap back restrictions should another wave come up. All in all, I was encouraged by our governor’s order. I thought it was much more measured than a lot of other governors.”

Sewell said gauging hospitalizations and deaths would be a key to reopening for business. She also noted that last week, congress passed an additional bill providing funding for small businesses. Sewell added that it was important that the PPP funding get to locally owned businesses and minority owned businesses.

“We’re also hard at work on a CARES 2 package as we contemplate going back to congress in the weeks ahead,” Sewell said. “We think it is important that we continue to stimulate this economy and at the same time provide direct payments to individuals and that we do so as expeditiously as possible.”