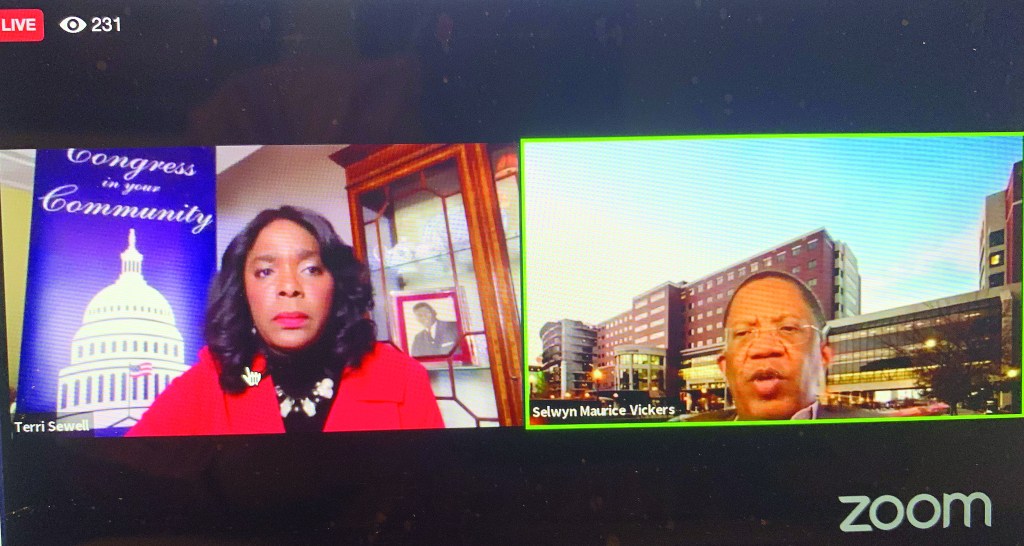 U.S. Rep. Terri Sewell is concerned with the spread of COVID-19 in Black Belt counties, including Lowndes County, and the quality of healthcare available to residents as the virus spread.

Sewell, who represents Lowndes County as part of the 7th Congressional District, also has family ties to the community. Last week, the congresswoman hosted a videoconference for constituents and media with Dr. Selwyn Vickers, senior vice president and dean of the UAB School of Medicine. Vickers and Sewell discussed COVID-19 and healthcare in Alabama and took questions emailed from reporters and viewers for more than 45 minutes.

“I think it’s really important that Alabama is about to approach what the public health care professionals are calling the surge the week of April 20 that we have a conversation about the health disparities in our communities,” Sewell said. “Alabama’s 7th Congressional District has the largest population of African-Americans in Alabama. We represent both inner city Birmingham as well as the rural Black Belt. I’m particularly concerned with the lack of testing we’ve seen in the Black Belt that this condition will only be exacerbated.”

“Whenever there are flaws or significant defects in a system, crises tend to exacerbate them,” Vickers said. “If you look at our healthcare system, the persistent flaws that we’ve had are our inability to address the disparities that have existed in minority populations that we’ve known for some time. I think our country has toyed with how serious this is and what it means. Is it self-inflicted? All of those things are not true necessarily, but there are things that the people have thought about in the context of how to approach it.”

Vickers said the COVID-19 crisis has brought the system and its impact to the forefront of people’s minds.

“Many of these people are doing the right things,” Vickers said. “They’re managing their diabetes, they’re managing their heart disease and kidney failure or COPD, but that in this scenario does not spare you. We’re not talking about the people who are just ignoring their health, we’re talking about the people who are living with their health who’ve gotten infected and once they get into the ICU, there’s often an 80 to 90 percent chance they don’t get out if they have these illnesses — if you look at the studies from other countries. Our data may improve on that — but the data from other countries is worse.”

Vickers said in some populations — the majority — for example, deaths are occurring in people who are in their 70s and 80s.

“The numbers for most of the African-Americans are significantly younger,” Vickers said. “They’re often in their 50s and 60s. We have people who are younger with disease who have limited ability to actually survive infection from this virus. The challenging part of this virus is that there are six sorts of human coronaviruses that exist. This is one that has crossed over from an animal source to a human and so we don’t have any experience to know how and what to expect from it. In flu season, one of the viruses that will cause it is a coronavirus, so we’ve had exposure to coronaviruses creating the normal upper respiratory tract flu. What’s different about this virus is that it initially attacks the lower airway cells. So from the beginning you get a couple of things that are distinct. You get typically a high fever, you get a dry cough and because it’s in the lower part of your airway, you’re often short of breath. Early on, if you take a chest X-ray or CT scan 70 to 80 percent will have findings of pneumonia, even though they might not be in the hospital. This virus is different and we’re still evolving to understand how it affects us. Sadly, it’s one of things that’s come along where we really don’t have any proven treatment.”

Sewell said she feels not enough testing is being performed in the Black Belt. For example, Lowndes County hosted a testing site a few weeks ago and hosts one again this week, but she feels more tests need to be deployed to the region.

Sewell and Vickers also discussed reopening the economy and businesses.

“There is such a complexity to this,” Vickers said. “There’s no preexisting roadmap to follow. We may need to reopen in regions. We need to see a consistent period where cases are flat or declining. We need to reiterate that this is ‘not’ returning to normal. We’ll need to respect social distancing and wearing of masks. The new normal has to be kept in order to prevent a major rebound.”

Sewell said if testing is prioritized and expanded and supplies are available, then reopening the state for business should be considered.

“We’ve got to have masks — the onus is on us,” she said. “It’s a supply chain issue — we’ve got to get the protective gear to the places that need it.”

Vickers and Sewell agreed that people need to take seriously recommendations for masks and other hygiene concerns such as using hand sanitizer and washing hands frequently.

“This is serious and we have to take it seriously,” Sewell concluded. “We need to be our own best advocates.”