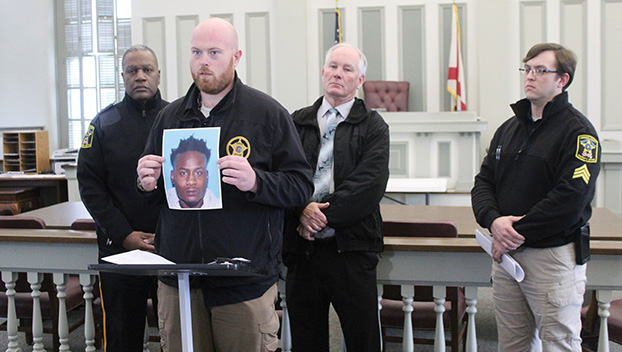 Lowndes County Sheriff’s Office investigators joined with Sheriff Chris West on Monday at the county courthouse in Hayneville for a press conference to seek the public’s help in locating a man suspected of attempted murder. Less than 24 hours later, he turned himself in to authorities.

“On Friday, Feb 21, the Lowndes County Sheriff’s Office received a call from citizens on Harry Road in the Collirene community that a subject was shot. Deputies responded to the area and were told that the victim — Tracy Tillman — was transferred by POV to the Vaughn Regional Medical Center in Selma before being “life-flighted” to Tuscaloosa Regional Hospital. He had suffered gunshot wounds to his chest and abdomen,” Cognasi began.

The victim, according to Cognasi, gave a statement while still at the Vaughn Regional Medical Center in Selma, allowing law enforcement to identity one of two suspects, Justin Lawrence.

“The Lowndes County Sheriff’s Office has since obtained a warrant for attempted murder for Justin Lawrence, and the investigation is still ongoing for the other suspect,” Cognasi explained.

The Lowndes County Sheriff’s Office is now seeking information Justin Lawrence’s whereabouts. The suspect has, according to Cognasi, been arrested before in Lowndes County.

“Mr. Lawrence is now being given the opportunity to turn himself in. If not, we will find and arrest him and serve this
warrant,” Cognasi said.

“We’re here to support and protect the people of the county. We wouldn’t be doing our jobs if we allowed activities like this to take place and we treated it in a nonchalant manner. I think it’s fair to allow Mr. Lawrence to have the opportunity to turn himself in… if he fails to turn himself in we will use all the tools at our disposal within the means of the law to track him down,” West said.

Lawrence turned himself in at the Lowndes County Correction Facility on the evening of Monday, Feb. 24.

The Lowndes County Sheriff’s Office is still seeking on the possible second suspect in this case.