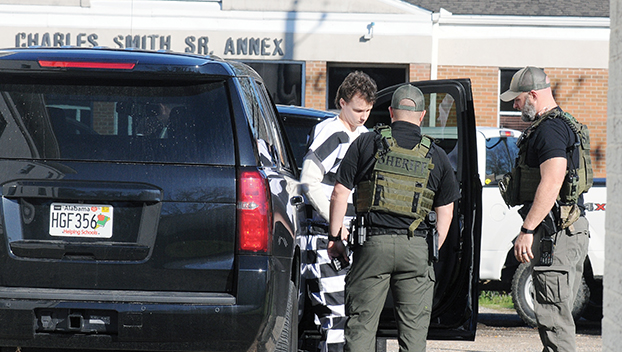 A judge ruled during a preliminary hearing Monday morning that the case against William Chase Johnson in the shooting death of Lowndes County Sheriff John “Big John” Williams will move forward with a review by a Lowndes County grand jury.

Before a large crowd in the Lowndes County Courthouse, visiting Crenshaw County Judge Tom Sport said that “probable cause exists for a grand jury to review the case.” Johnson, 18, was charged with murder in the shooting death of the longtime Lowndes County sheriff. District Attorney Charlotte Tesmer upgraded those charges to capital murder after Johnson’s Nov. 25, arraignment.

The Lowndes County Courthouse was under heavy security as Johnson arrived and no cell phones or cameras were permitted in the courtroom.

State Bureau of Investigation Lt. Shawn Loughridge was the only witness called in the hearing and spoke about the night of the shooting. He said that he received a call about the shooting and responded with other agents to the scene. He described himself as the “quarterback” at the scene as he coordinated investigation efforts.

“When I arrived, I observed a black pickup truck with Sheriff John Williams lying on the ground,” Loughridge said.

Loughridge said Williams was struck by a single gunshot on the upper lip between his chin and left nostril. He also said he reviewed the surveillance footage and identified the suspect as Johnson. He also said the hours after the incident, when Johnson was in custody, he admitted to shooting Williams.

For more on this story, Thursday’s edition of The Lowndes Signal or visit www.lowndessignal.com