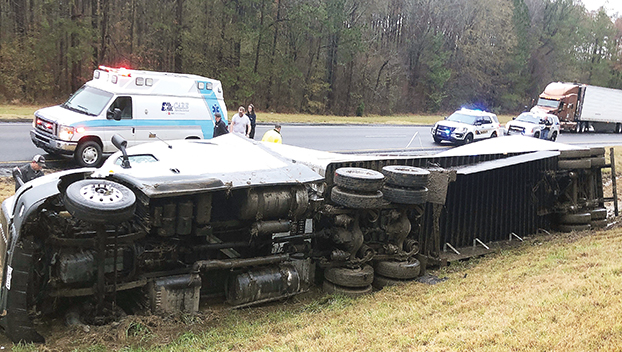 A crash involving a semi-truck filled with cardboard boxes backed up traffic for hours on I-65 on Dec. 22. | Submitted Photo

A crash involving a tractor-trailer on Interstate 65 Dec. 22 snarled traffic and resulted in minor injuries.

Burkville Volunteer Fire Department Chief Dustin Casey said Burkville and Sandy Ridge were called to the area of the 153-mile marker around 10:30 on Sunday Dec. 22.

Traffic was back up all the way to Montgomery as Lowndes County Sheriff’s Office deputies and Alabama Law Enforcement Agency troopers worked the scene.  CARE Ambulance Service transported the injured driver to Baptist South for treatment.

The truck was loaded with cardboard packaging. Randy’s Wrecker Service worked for several hours to remove the truck.

Hours later Burkville responded to another accident with four cars involved. The accident occurred near the 158-mile marker and no injuries were reported.

Authorities in Butler County also worked several accidents on I-65 that Sunday as heavy rains came through Central Alabama.

Chris West to be sworn in as Lowndes Sheriff…